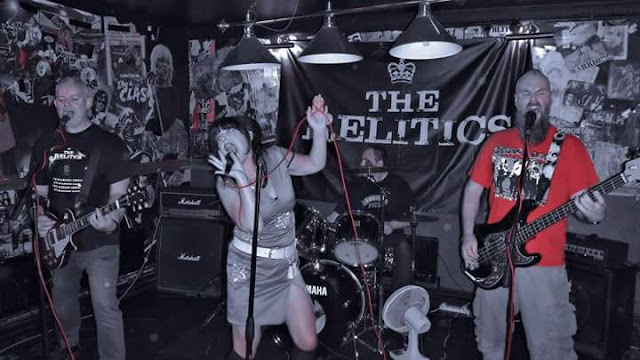 One of the albums I enjoyed most last year was Bricks And Mortals by politically charged Durham band The Relitics so I had high expectations when bassist Neil Tunstall sent me the tracks from a new split with Australia's anti fascist/working class punks  Myrtle Place. (If you're wondering how a band from the North East of England got together with one from Brisbane in Australia, Relitics guitarist/vocalist Mick Hall grew up with the dad of Myrtle Place's drummer, which explains not only the geographical split of the bands but also the generational gap)

The new tracks (there's 3 from each band on the forthcoming untitled 12" vinyl ep) are as you'd expect, very good indeed (as are the harder edged songs from Myrtle Place). The ep (there will be 250 copies, first come first served) is pencilled in for mid October but you can enquire about pre orders on both The Relitics' Facebook page : https://www.facebook.com/Relitics/ and on Myrtle Place's : https://www.facebook.com/myrtlepunx

I'll be playing a different song on Tuesday's Just Some Punk Songs show (8pm UK time here : http://mixlr.com/mick-fletcher/) but for the purposes of the blog I'm going with the song that's just been posted on Youtube. Intelligent, mid paced melodic punk, this is Anti Fascist.......

Email ThisBlogThis!Share to TwitterShare to FacebookShare to Pinterest
Labels: 2016, punk, The Relitics