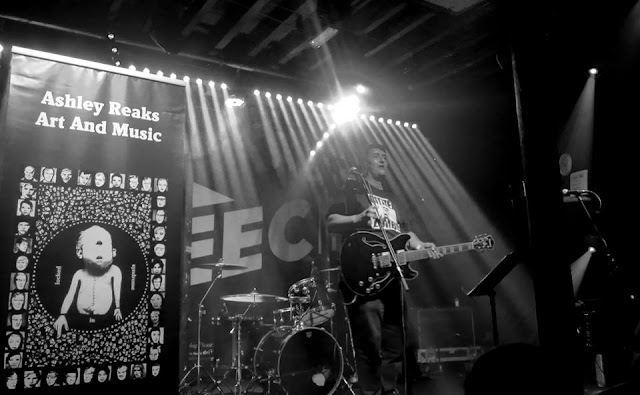 Some of you may remember that a week or so ago I posted the title track of Ashley Reak's new album, This Is Planet Grot. The album is really rather fantastic and has been hammered to death on my car's cd player recently. If you haven't heard it yet, check it out : https://ashleyreaks.bandcamp.com/album/this-is-planet-grot.

Always keen to get other people selecting the music for these updates I asked Ashley for his top 10 songs and this is what he kindly came up with.....

1) THE SKIDS - The Saints Are Coming

First of my Top Ten punk/new wave songs is this beauty from The Skids - Stuart Adamson's guitar set them apart ( I even liked Big Country) and Jobson's lyrical, up front voice is superb

No 2 in my Top Ten Punk/New wave songs is 'In A Rut'. Again I could pick any number of songs by The Ruts. Tons of front, passion, principles, pain and urgency all played with great musicianship (Dave Ruffy is a superb drummer in any style), and always developing musically and trying stuff out. They would have undoubtedly gone on to have been a huge band had it not been for the untimely death of Malcolm Owen, but in the short time they were around they left a legacy of brilliant music that I return to again and again

3rd song in my Top Ten punk/new wave songs is from the unique and truly punk X-Ray-Spex. Poly Styrene looked amazing and was my idea of a frontman/woman (ie the opposite of a rock God!). Germ Free Adolescents is one of the great and influential albums from that era and this song my personal favourite. The sax is charmingly naff and her voice is wonderfully free and beautiful in its own way

No 4 in my Top Ten punk/new wave songs is 'Jocko Homo' by Devo. I won't even try to wax lyrical about this one, suffice to say that I wish I could make music and art as unique as this - everything about it musically and visually resonates with me on a level I can't quite explain - like all great art should

5th song in my Top Ten punk/new wave songs is from The Ramones, the band who made me want to be in a band myself. I mimed bass on a daily basis after school in my bedroom along to the 'It's Alive' album for a few months before realising I could probably play along to it now I'd learned about 5 notes! 'Rocket To Russia' is my favourite album of theirs and 'Teenage Lobotomy' my favourite track.The lyrics are so funny and fucked - chanting 'Lobotomy' in celebration takes some beating - and they had tunes! I also remember staring at the little cartoons with the inner sleeve lyrics for ages

6)  THE STRANGLERS - Peasant In The Big Shitty

No 6 in my Punk /New Wave Top Ten is 'Peasant In The Big Shitty' by those violent hippie/punks The Stranglers - I could have picked numerous songs (the entire Black and White album for starters) but picked this one because of the mix of punk, prog and psychedelia. They sounded and stood separate to the movement and still sound unique and groundbreaking to me - I absolutely love Dave Greenfield's keyboard playing, but on this track it's his underused and sinister voice which does it for me. And they brought odd-time signatures into the genre - no bad thing!

No 7 in my Top Ten punk/new wave songs is 'I Don't Mind' by The Buzzcocks - Pete Shelley was almost too good a pop songwriter for the genre and they never got the recognition they deserved imo. Endless great tunes - I love John Maher's chaotic and naive drumming, the staunch anti-fashion and Shelley's vulnerable sneer is just perfect


8)  MAGAZINE - Give Me Everything

8th in my Top Ten punk/new wave songs is from Magazine (it could be any number of their songs). The sleeve art was the first thing that captivated me and the song itself is just wonderful. The barely-contained aggression of Barry Adamson's bass, Dave Formula's funky as f**k keyboards and Devoto's 'in-yer-face' other-worldliness are a potent mix

No. 9 in my Top Ten Punk/New wave songs has to be 'Anarchy In The Uk' by the Sex Pistols. Personally i find it hard to reconcile how important and believable Lydon was with the cringeworthy character he's become (remember that Question Time appearance? - Ouch!) BUT he opened the doors and spoke a language I understood and needed as a disconnected and weird kid lost in suburban hell. His voice here is so powerful, frightening, yearning and full of soul it's a thing of rare beauty (though some might say different!). In hindsight I think Steve Jones' massive thug guitars played a huge part in the Pistols sound - his playing is so physical it leaps out of the speakers - great production too <3

No 10 in my favourite punk/new wave songs is this monster from Killing Joke. Geordie's innovative and massive guitar riffing rightly get lots of praise but I really love Jaz Coleman's voice - so ominous and aggressive it's unnerving - the album's a classic too as is the artwork

You always remember another song after you've written your Top Ten.:-) How could I forget SLF whose 'Inflammable Material' album was one of the first punk albums to scorch my young brain. The energy and excitement of that record and particularly the aggression and how believable they sounded made a big impression. I particularly loved the fizzy guitars and they had THAT voice, courtesy of Jake Burns