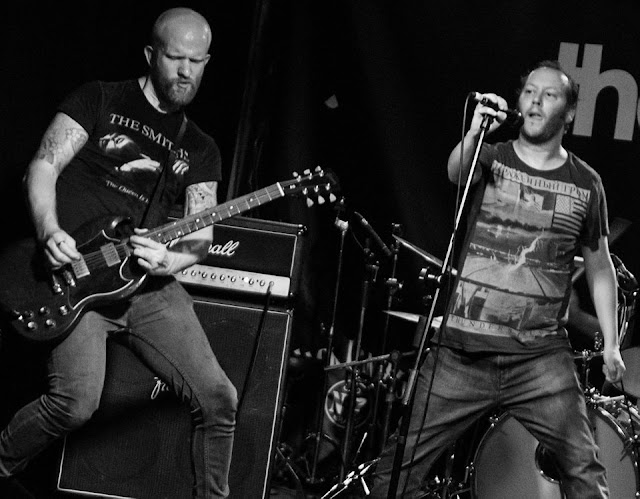 "You're scared, you're scared of what we might become so glorify your country and big up where you're from...."

Kleine Schweine are a noisy and inventive political punk band based in Leeds who's line up reads Neil Hanson (vocals), Bart Pettman (guitar), Oliver Mossop (bass) and Matt Delahunty (drums). Vibrations magazine described them as being "as brutal as Crass but with a hint of Wildhearts sleazy rock/pop fun."

If you check out their Bandcamp page you'll find their 2 albums, The Party & In Your Own Back Yard, and a number of eps including the recent Porcine Of The Times : https://kleineschweine.bandcamp.com/. If I was to briefly summarise the new ep I'd just tell you it's 6 tracks of scathing but humorous critique with snappy titles like Our Ex-Prime Minister Stuck His Dick In The Mouth Of A Dead Pig (in which Neil Hanson acerbically notes that at least Boris Johnson makes us smile, he's a good laugh....except  he'd eat your children!).

This is the excellent video for one of the new songs, it's called If We Close All The Borders Down You Can't Go To Benidorm.......