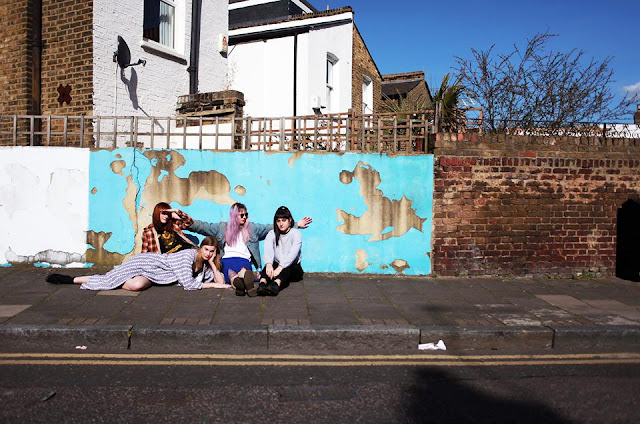 Almost 2 years to the day I posted a song from Primetime's debut ep, telling you that they were a 4 piece post punk all female band from London and I made rather obvious comparisons with Delta 5 ( http://justsomepunksongs.blogspot.co.uk/2014/06/primetime-tied-down.html ).

The ep was much played during the remainder of the year and the song I'd highlighted, Tied Down, ended up being my favourite of 2014 ( http://justsomepunksongs.blogspot.co.uk/2014/12/the-just-some-punk-songs-top-30-songs.html ).

As you can imagine, when I discovered that they'd released a new ep, my expectations were high. I'm not disappointed. Entitled Going Places, the new 4 track ep is out on La Vida Es En Mus and it's really rather good. You can check it out here :   https://primetimepunx.bandcamp.com/album/going-places

Can I also point you in the direction of their cover of the Ginny Arnell song from 1963,  Dumbhead. It's out on the Emotional Response compilation Typical Girls which is a great collection of some of the best female fronted bands from around the world. Both Dumbhead, and the album in general, are excellent :  https://emotional-response-recs.bandcamp.com/album/typical-girls

The song you'll find below is the lead track from the new ep and I'd hazard a guess that it'll be featuring in my best of 2016 list. Pervert........