Stinkbomb - Slaughter At The Punk House 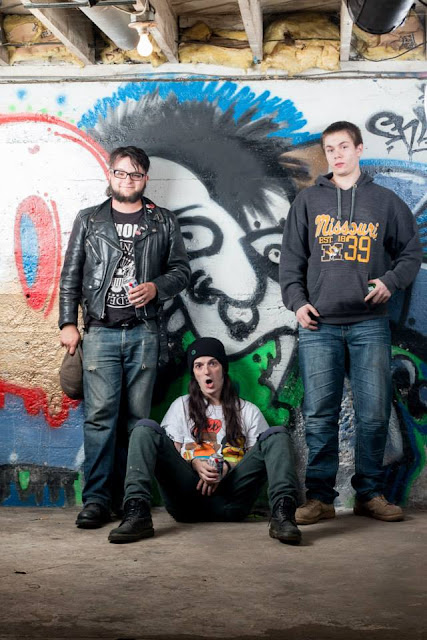 The second of today's updates, also from the Spitting Contest split album, features a song by Stinkbomb.

From St Louis, they're a 3 piece featuring Joey Remote (bass/vocals), Kriket (guitar/vocals) and Aspen Boswell (drums) who's aim is to have a good time, all the time. Influenced by the likes of Black Flag, Bad Brains, The Ramones and The Queers, they aren't as pissed off with the world as album collaborators Life On Mars, rather than singing about how boring life is, they're more likely to be jacking off with their poop!

They got together back in 2006 though it wasn't until 2013 that they began touring and released their debut album, Babies Are Stupid. If you want to find out more about them then have a look on their Facebook page : https://www.facebook.com/Stinkbomb-123243414409347/timeline.

As I mentioned on today's other update, the split album is on Braindead Records and is available for a couple of weeks "name your price" : https://braindead-records.bandcamp.com/album/pissing-contest

This song gives off a roughed up Lillingtons/Teenage Bottlerocket vibe and is called Slaughter At The Punk House......