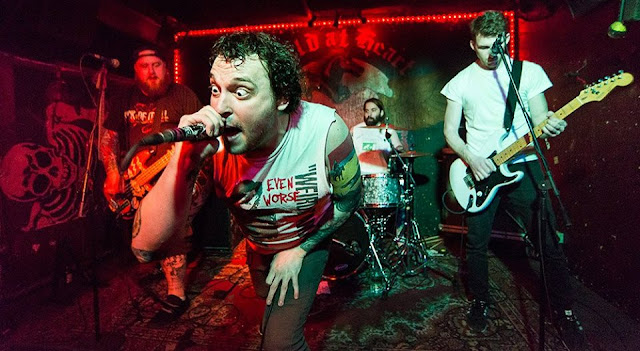 Forming in 2010 following the demise of Class War Kids (who were a wonderful band themselves : http://justsomepunksongs.blogspot.co.uk/2015/10/the-class-war-kids-reflection-rage.html), Brutal Youth are from Toronto, Canada.

They took their name from a 1994 album by Elvis Costello but their sound is rather more hard edged than that might suggest. The line up features Paddy O'Lantern (vocals), Greg (guitar), Kyle (bass) and Kaitlyn (drums).

2010 saw the release of debut album Spill Your Guts and this was followed by a split with Montreal band Tightrope. 2013 saw them unleash the Stay Honest album and their most recent offering was last years Bottoming Out ep. You can check them all out (along with covers of 7 Seconds and Gorilla Biscuits classics) here : http://brutalyouth.bandcamp.com/.

The lights bring me back every single time. Green lines blurred across a starlit sky, and I reassess but don’t change my mind I know I made the right choice. Blanket the hills, bury the dead, the same one thought echoes and then whispered replies from bitter winds “this city hates you too.” As I lay down this throbbing head I hear the words repeat themselves. Don’t listen to a word they’ve said, they’ll never know. I guess some people never change. Some things will always stay the same. With nowhere to go and no one to blame, accept yourself. I guess some people never change and some things will always stay the same, but I won’t forget that one refrain “don’t forget to stay true to yourself.”