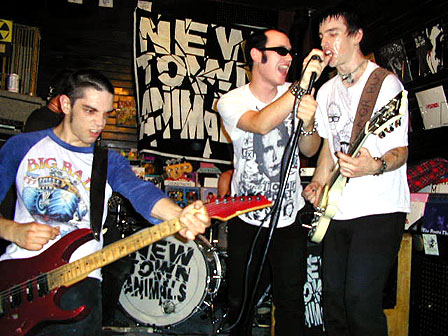 New Town Animals were from Abbotsford, Vancouver and formed in 1998. Lead singer Nick Newtown was a Brit which gave them a sound more akin to the punk I grew up listening to a generation earlier as opposed to the plethora of Canadian and American bands that were around at the turn of the Millennium. Also featuring were future Briefs/Cute Lepers bassist Stevie Kicks, future Tranzmitors/Fashionism frontman Jeffrey McCloy,  Bobby Beefy (guitar) and Chucky (drums).

December 2000 saw them release their debut single, the A side of which features below. There was also a split ep with Delateurs which featured Baby You're The Reason and a cover of Sham 69's Little Rich Boy. Their only album, Is Your Radio Active? followed in 2001, a 5 star review on Amazon describes it as being full of 3 minute pogo pop punk songs reminiscent of The Undertones, The Briefs and The Shocks. They also released a couple of other singles (Fashion Fallout and Cori Street) before calling it quits. You can listen to their music here : http://newtownanimals.bandcamp.com/

If you're a reader of this blog you'll either already love this song or you'll discover a new favourite in a moment. This is Lose That Girl.....