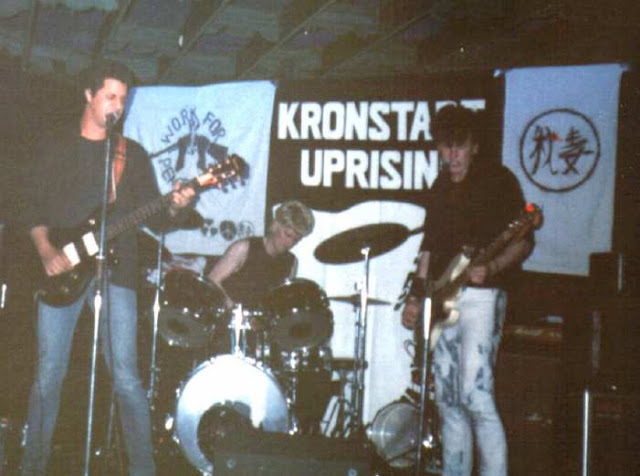 "when the bomb has been dropped what we gonna do?"

Kronstadt Uprising formed in 1981 (following the demise of The Bleeding Pyles) and took their name from the unsuccessful 1921 rebellion against the Bolsheviks during the Russian Civil War (Kronstadt was a Russian naval fortress on Kotlin Island in the Gulf of Finland). From Southend, England, the original line up featured Steve Pegrum (drums), Spencer Blake (vocals), Paul Lawson (guitar) and Andy Fisher (bass). Blake left the band "due to his lack of commitment" and Lawson took over on vocal duties in 1982.

If you want a detailed history of the band I'd recommend you check out this excellent article : http://www.southendpunk.com/html/kronstad.html.

The song I'm posting today was the lead track on 1983's Unknown Revolution ep and it's a pounding, passionate classic of the eras anarcho punk scene called Blind People.....