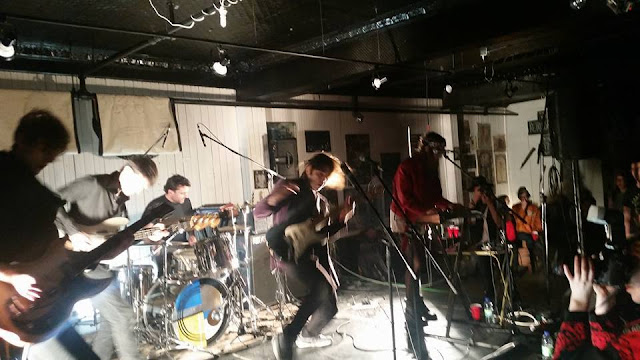 Today's song is one that I've got on the playlist for Sunday's Just Some Punk Songs show, it's by Red Mass who are from Montreal and who's list of influences is a little different to most of the bands that feature on here (Ornette Colman, Captain Beefheart, Chrome, White Noise, John Coltrane, Cliff Martinez, The Sound).

They say that there's over 100 contributing members and visual artists who help with the persuit of "ideals of free thinking and chaos magic." Probably more relevant to this blog is the fact that the core of the band is Roy Vucino (Pypy, , CPC Gangbangs, Les Sexareenos and several more) and his partner Hannah Lewis and they play dark punk for dark days.

They've released a fairly substantial body of work over the last decade or so, their sound isn't that of your average punk band. They aren't afraid to experimant both sonically and visually and having a conveyor belt of people helping out keeps things varied. You can get more info here :  https://www.facebook.com/redmassband/

They've just released a new 3 track 7" ep on It's Trash Records, it's called Rat Race and you can find the digital version here :   https://itstrashrecords.bandcamp.com/album/red-mass-rat-race-ep

This is my favourite song from the ep, it features vocals from Erick Bradshaw H (Family Curse, Cyanide Tooth, Maximum Ernst) and it's called Today I Die...