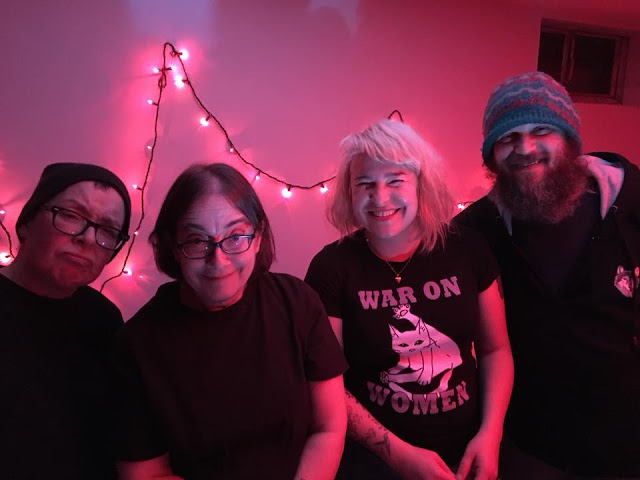 Scary Women formed in 215, are from Lansing, Michigan and as well as playing searing rock n roll with a sinister edge they aim to celebrate strong females. With influences running all the way from Bikini Kill to Led Zeppelin (via the likes of Patti Smith, Husker Du, Guided By Voices etc....), they feature a line up of Jennifer Toms (bass/vocals), Amy Starr (guitar/vocals), Tammy Cook (guitar/vocals) and Joel Kuiper (drums).

They seem to be gigging pretty much constantly and you can check out dates here :  https://www.facebook.com/scarywomenband/

Intent on world domination, they released their debut, Self Titled album in March. It features 13 tracks of  riot grrrl type rock and is available digitally here : https://scarywomen.bandcamp.com/album/scary-women

My pick of the bunch is a song about Joyce Patricia Brown. Better known as Billie Boggs, she was a homeless person who the city of New York attemped to force into a psychiatric treatment programme following then mayor Ed Koch's policy of removing mentally disturbed homeless people from the streets. You can read more about it here : https://en.wikipedia.org/wiki/Joyce_Patricia_Brown

This is Billie Boggs....