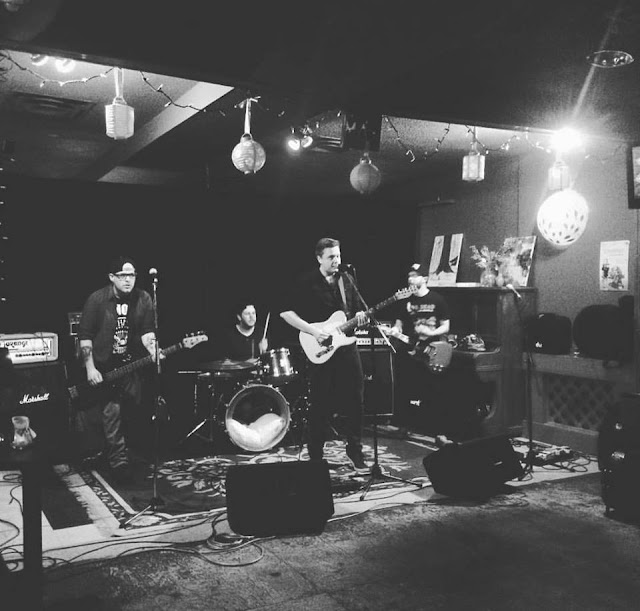 The Wet Bandits are a melodic punk band from Toronto who formed in 2015 and feature a line up of Dylan Ramstead (vocals/guitar), David Huzyk  (vocals/guitar) (both were members of The Gentlemen Thieves  https://thegentlementhieves.bandcamp.com/ ), Derek Twigger (drums) and Trent White (bass/vocals).

They released the Sound Waves ep in 2016 and followed it up with 7 track ep, I Hope You Hear This, in May of last 2017. They rounded off last year with a track called The Optimist. Their sound is pretty upbeat and catchy. A mix of pop punk and alt rock, their songs are easy to sing along to and their lyrics are well written :

You’re so much cooler than me, your hair’s so many colours You laughed when I called you my Ramona Flowers We spoke our own language in that cold nicotine cloud Can I see you again? Can I walk you back to your house? Well it’s too bad that in my head is the only place that you exist I made you up. Fictional love


I heard their new single last night, just after getting home from a late shift at work. I was chilling with a cold beer and as the song started in my headphones my first thought was Laura Jane Grace. I was immediately drawing comparisons with Against Me! at their most upbeat. Not that the other songs I've listened to by them sound particularly like Against Me! and not that the subject matter of the new single is overly upbeat. I liked it though, definitely one to play on the next Just Some Punk Songs show (as well as share here today). You can find it here :   https://wearethewetbandits.bandcamp.com/track/veruca

If you want to know more, give them a like....  https://www.facebook.com/wearethewetbandits/

Anyway, the new single, it's very good and it's called Veruca....

Veruca, why are you so cold?
Will an apology come my way?
Well, I don't think that is something
That you could bring yourself to say

I Just want to dance,
But you just want to hate
And no amount of free nachos
Could ever make you forget all that heartbreak

Well, you say that I am guilty
Purely by association
Excuse me, I'm calling bullshit
Correlation's not causation

The girl who sickens me is at home sick,
While I'm at Homesick with the girl who's sick of me
You're pouring salt in these wounds that
You tore open originally

There are times when decisions just aren't mine to make
So instead, tell your friend to stop looking for love where she lost it in the first place
'Cause in the end, he's my friend, and I'd still buy those nachos
Every single fucking time