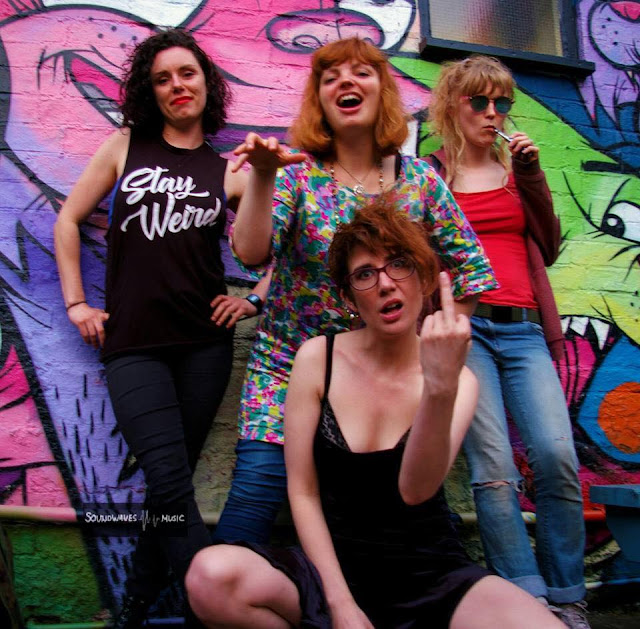 Another smash with the folk in the chatroom for this week's Just Some Punk Songs show (the saved verion of the show will be uploaded to mixcloud tomorrow https://www.mixcloud.com/mick-fletcher/ ) was Stuck On A Loop by Manchester feminist psych post punks ILL. It was a definite shoe in for posting on here but just to demonstrate to those lovely chatroom people that ILL are no one trick pony I've instead gone with another (equally wonderful) track from the new album.

That new album is called We Are ILL, it came out last month on Box Records, it's been picking up plenty of rave reviews from proper reviewers and definitely deserves your attention. The band have been together since 2012, feature a line up on the album of Harri Shanahan (vocals/keys), Whitney Bluzma (vocals/bass/percussion), Fiona Ledgard (drums), Sadie Noble (vocals/ guitar/percussion/tapes) and Tamsin Middleton (vocals) and you can find it alongside their earlier singles & eps here : https://weareill.bandcamp.com/

Colourful, inventive and really rather cool, We Are ILL should go down a storm with anyone who enjoyed the Lovely Eggs recent smash hit album. Check out more band info here : https://www.facebook.com/weareill/

The song you'll find below is about a homeless woman who lives in a Manchester bus shelter, watching the people coming and going, invisible to all. Plenty of local bus destinations are mentioned and there's a brilliant referencing of a Fall classic. Love it!

This is titled Bus Shelter.....