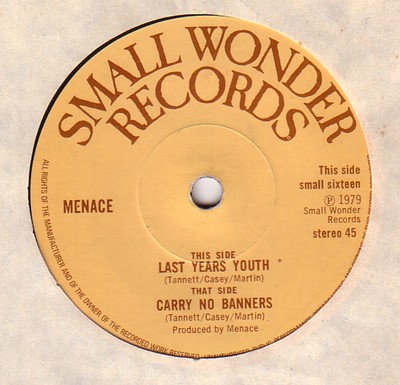 Menace got together way back in 1976 and originally lined up with  Morgan Webster (vocals), Steve Tannett (guitar), Charlie Casey (bass) and Noel Martin (drums). They released a handful of classic singles before calling it a day in 1979 due mainly to a lack of press coverage and record label interest.

They got back together in 1999 and though there's been several line up changes (Noel Martin is the only remaining original member) they're still fighting the good fight. Their most recent album was 2014's London Stories, a song from which you can listen to here :  https://www.youtube.com/watch?v=caMQEN_hDIg

For today's song I'm going back to the 70's. From the flip side of their Last Years Youth single, this is Carry No Banners......