Tot Rocket and the Twins - One more eviction 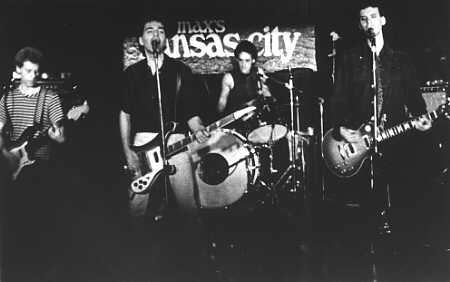 Anyone like The Clash?  This lot certainly did.......Founded in 1979 in Connecticut before moving to New York City, Tot Rocket And The Twins feature today and they bring with them a killer chorus that sounds uncannily like the boys from old London Town. Not only did they have the guitar sound off to a tee and backing vocals that sounded more like Mick Jones than Mick Jones did, they also poached The Clash's trademark harmonica sound.  Featuring Ron Spitzer (lead vocals/bass), Andrew Halbreich (harmonica/vocals), Robert Poss (lead vocals/guitar) and Lou Farace (drums), they released their first single, Reduced/Fun Fades Fast In The USA, in 1980 on Whiplash Records. They then transferred to Trace Elements records for the follow up, the Eviction 7" ep (which featured Michael Goglia on drums) before putting out their piece de resistance, 1981's Security Risk ep (another change of drummer saw the introduction of John Bulcken).

They morphed into Western Eyes and released a self titled album in 1984 before Robert Poss found fame with Band Of Susans. Italian label Rave Up Records put out a compilation in 2005 called Television Rules : The Definitive Collection.

From the Security Risk ep, this is my favourite of theirs, One More Eviction.....