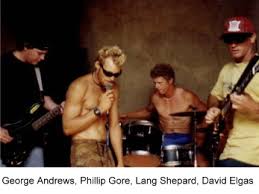 "Woke Up Today
Had Nothing Better To Do..."

Today's blog entry is the second time I've featured a band from Hawaii (the previous time saw a song posted by The Catalogs). This lot were called Backwash and they were a north shore skate punk outfit that released their debut album, Drink This, on New Year's Day 2000 on the Hawaiian Express label. I know pretty much nothing about them but hopefully I'm right in saying that they had an original line up of Phil Gore (vocals),  Lang Shepard (drums),  David Elgas (lead guitar) and George Andrews (bass).

From that debut album, here's a great song called Sniper......