An Interview With Johnny Grant (Vocalist With The Straps) 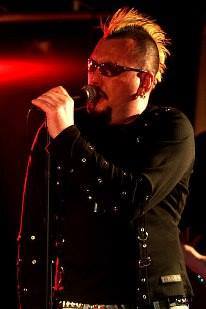 Occasionally I'll pluck up the courage to conduct an interview, luckily all the subjects so far have been really good interviewees who've helped ensure that I don't look too far out of my depth. Straps vocalist, Johnny Grant (aka Jock Strap), certainly put in the time and effort to help produce what I think is a pretty decent effort (although one day I'll work out how to make it look more professional!) so my thanks go out to him......


The band formed in 1977. was this as a result of seeing punk bands suddenly
springing up on every street corner? did you think i can do that better and what sort of music
did you like before punk emerged?


The band formed in late 77 while I was still in Glasgow, they had a singer

called Howard Jackson, but they only done one gig

in a school hall i think it was. Then when I arrived from Glasgow he was

letting the band down by not turning up to

a go on vocals. I had never sang before, but

thought to myself , how hard can it be to shout down a mic? I had

already been playing bass for about a year after hearing

the stranglers. And as you asked about who I listened to before punk, I

had a keen interest in music all though my childhood, bands like the

beatles etc as a kid, but just before punk I liked Thin Lizzy, Bowie, iggy

and the new york dolls.

you shared a stage with some top name bands who were enjoying chart success like the damned, sham 69, slf, adam and the ants, uk subs etc. was it all one big happy punk family with everyone helping and encouraging one another or was there a sense of us and them between the bands that were getting on top of the pops and those that weren't quite getting the break that catapulted them onto the nation's tv screens? did you want fame and fortune?


That's a very good question. I think for me personally when I first

became involved with music . I was just happy to be playing with some of

my heroes ,like The Damned , but as time went on and I found myself

recording with the likes of Jah Wobble,

out on the things they were enjoying and couldn't

really figure out why. At first I thought I was maybe not that good a

musicians. So I guess I was a bit bitter underneath as i think we were

under rated, but I'm not the type of person to moan

about poor me ,so I've just got on with it over the years . I would say

though that there's a lot of jealousy in punk rock and

not much help from fellow musicians. But of course no one would admit

sound cloud with praise of what a good track this might

be. But it seems when I post songs it's very rarely that a musician from

another band on the page will praise it. Yes there's

a lot of jealousy out there among bands. I think John Lydon has spoke

about this before regarding the big 4 bands at the

time. As for me wanting to be famous, no, but I feel the straps were

largely ignored outside London due to bad management

and us never having an agent. i see bands all the time flying off to

Europe or the USA , and I still wonder why we never got to

do that. I also find it disturbing how some so called punk bands can

quid. If the money was distributed a bit more fairly, then we as a

bandwould have recorded a lot more. Unfortunately we have to fund our

own recording, while trying to feed our families.

i'll admit to being a little embarrassed that even though i first discovered punk whilst at school in the late 70's and had heard of many of the people you played with or who appeared on your records i don't remember hearing of the straps till a year or two ago. did i miss all the peel show appearances and music press write ups or were you unfairly overlooked despite pulling in some decent crowds and releasing some really good songs?


Haha that's ok .. We never got to do a Peel Session which is dissapointing. I think the Straps were really the forgotten support band in punk, we seemed to get great gigs with huge bands , but I guess we were cheap to hire so maybe thats why we got so many great UK shows to do. Although having said that we did headline all the big clubs Like the Marquee selling it out both times, also the Music machine and 100 club were regular shows we headlined, always ramming them when we played. So I'd say London was our manor and we always done well there. When we ventured outside the capital it was usually as main support to one of the big bands like the Damned.We did have some great write ups in sounds and many fanzines

"life in Brixton, feel the heat,
Too much trouble on the street,
But I'm not gonna leave"


were you getting hassle for being punks back then? what was it like moving into the 80's as more and more punks were raiding their mum's make up bags and coming over all new romantic, did it feel as though punk was indeed just about dead or were you always confident you'd still be rocking so many years later?


Brixton was ok for punks . We always had a mutual respect for

rastafarians and I would say Vice versa. Most punks were squatters

there and we all seemed to mix ok. I can only recall one incident of race

hate against a punk girl I knew well, but these things happen in life

unfortunately. I would say most of the trouble we got was from the police

and the straight soul boy types . Yes the 80's arrived and some punks

who squatted just seemed to disappear, probably back home to mummy

and daddy in the suburbs. Then a few months later you would see them

with dresses on and wild makeup. I found it amusing . I remember I was

with long blonde hair . I asked what I could do , she replied don't you

recognise me Jock? Im Shaggy, we squatted together in Newark house

Brixton.. I was baffled.. My name is now Geraldine lol... Each to their

own though. Shaggy was a good punk from Surrey, mad Crisis fan with


why did the band split up?


why did the band split up... We never really split up ..I seem to remember

we played with Stiv Bators and the Wanderers. It was a sunday night gig,

and the whole day was a bit of a disaster. When we were unloading our

equipment, Dave left Simon's Gibson les Paul guitar at the side of the

van, our roadie at the time was Dave Lloyd who later became the

guitarist of the UK subs , he went back out to get it and it was gone,

some fucker had stolen it . Simon as you can imagine was gutted, but

never blamed Dave or held it against him, it was a simple mistake, he

thought Dave our roadie had picked it up. So the dressing room was not

a happy place to be in. I fucked off to the bar as the 3 canadians were all

arguing, but they always were anyway, two brothers (and Jim was like a

on with it untill it blew over. The gig itself went great we played well and

got a great reception. But the next Day Jim announced his departure,

and John soon followed. Dave Simon and myself carried on with various

the same. Pete Davies (ex uk subs) joined us to do the album. He knew

before. John Werner rejoined to play bass on the album called The

Straps. After the album release ,instead of touring it, we just drifted into

oblivion as we had no shows booked ,no agent or management at that

you're back together, you're gigging with many of the bands that were round when you were first active. is the atmosphere between you all the same or is it just like a big party now, a case of this is all a bonus, let's have fun? unlike some of the
bands that have reformed, you've released a new album that is worthy of being mentioned in the same breath as your old stuff. are there any more releases in the pipeline?

few times,releasing a LtD addition cd called In Love with the new world

Order, we decided to call it a halt 2007 due to some health issues I was

experiencing. But Yeah we are back now with a bang. Me, Dave

Flicknife records and its getting some rave reviews, being hailed as a

new punk classic , which is nice. The album was written in the style of 77

punk, some have compared it to the Damned's Machinegun Ettiquette..

we all just get on really well as mates, this in my opinion is the main

ingredient for a successful sound live and in the studio. If you get on well

as people, you will work well together . We are doing Rebellion fest in

August and will be performing Brave New Anger our latest release. I am