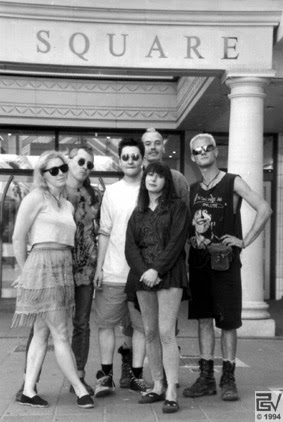 "we said we hated uniforms but wore one all the same....."

Before we start, can I just say that I love this song. I could quite happily sit here for half an hour with it on repeat. It's not your typical blast of upbeat, noisy punk, I'm sure the band wouldn't refer to themselves as punk and they certainly didn't dress in "punk uniforms." It does however name check some of the great and the good from the genre (I won't spoil things by revealing who but if you aren't familiar with the song you'll enjoy playing spot the "celeb" in the lyrics, possibly more so if you're a Brit).

Cuckooland were a 6 piece from Reading who formed following the demise of  Shelley's Children back in 1993. A couple of brightly coloured demo tapes were followed in 1994 by a trio of singles, As Good As It Gets (the b side of which is the song I'm posting today), Winter and Radio Friendly.  All 3 a sides featured on their debut album, Pop Sensibility ("an excellent example of bubblegum pop with an edge of agitation").

All those releases were on Damaged Goods records, as was a 4th single, Happathy, their final 7", Oh Boy!,  appeared on the Candy Floss label in 1997. If you want to hear more by them, you could do a lot worse than seeking out their Banga Boom Boom compilation : https://damagedgoods.greedbag.com/buy/banga-boom-boom/

A glorious trip down memory lane, this is Richard Jobson Dance.....