Rabies Babies - Rape Is Rape, Even If The Rapist Is In a Band That You Like 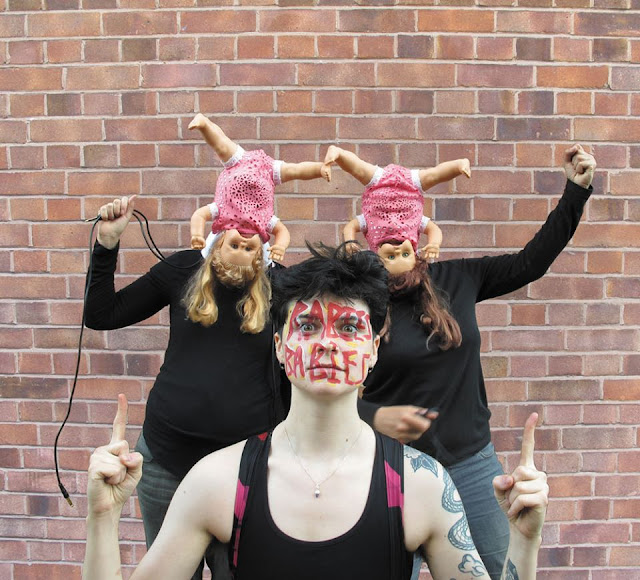 Well this is a timely new track given all the recent disturbing allegations about certain people associated with Burger Records (https://www.vulture.com/2020/07/burger-records-allegations-bands.html). These kind of stories are by no means a one off but part of a widespread problem throughout the music industry and society as a whole and hopefully a line in the sand has been drawn and a clear message sent out that sexual assault and misconduct will no longer be tolerated.

Rabies Babies (https://www.facebook.com/rabiesbabiespunk/) are Laura Saracino (guitar/vocals), Lorna Tiefholz (bass/vocals) and Tabi Sutherland (drums/vocals), an east London diy punk 3 piece who've been kicking the arse of The Patriarchy in one way or another since 1999. They mix anger and humour to make their point and if I was going to make a contemporary comparison I'd probably go with fellow Londoners Foxcunt.

They feature today with a blistering track from their forthcoming debut mini album. Released by Damaged Goods Records on August 21st on ltd edition 10" white vinyl, you can pre order it here :   https://damagedgoods.greedbag.com/buy/rabies-babies/

Side 1 is the angry side and deals with rape & casual sexism whilst they lighten the mood on the flip with songs about drinking and the fuzzy headed consequences. You can listen now here :    https://rabiesbabiespunk.bandcamp.com/releases

This is the opening track, it deals with the seedy side of the music industry. It also appears on the Rebellion 2020 New Band (Introducing) Stage compilation which is well worth you checking out :   https://jsntgmnew.bandcamp.com/album/rebellion-2020-new-band-introducing-stage

"Just because someone is in a band that you like doesn't mean they are incapable of sexual assault. Too often when men in bands are accused of assault the victim is called a liar, blamed, and is ostracised. This song is not commenting on any particular person or incident. We believe that the problem is widespread - almost all of the women we know in the punk scene have experienced some levels of sexual assault or violence, it is time that the problem is taken seriously and we get rid of the culture that gives men in bands a free pass to act how they want with no consequences."

It's called Rape Is Rape, Even If The Rapist Is In A Band That You Like...