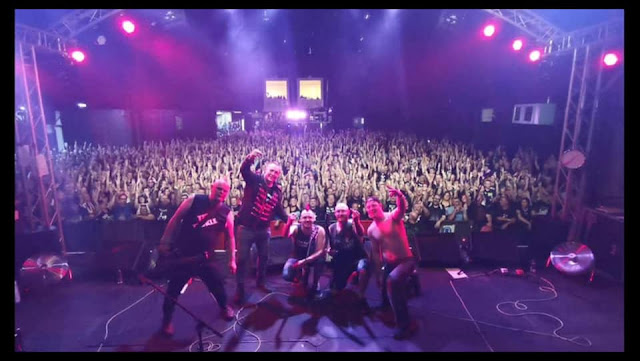 One downside to growing old is that your heroes start dying. It seems as though every week there's news of another punk rocker passing away (last week it was Walter Lure from The Heartbreakers). In May, Dave Greenfield, the keyboardist with The Stranglers (who for a couple of years at the end of the 70's were my favourite band) sadly passed away. Today I'm posting the last song he featured on.

Hung Like Hanratty (https://www.facebook.com/HungLikeHanratty/) are the irreverent  Sutton-In-Ashfield 5 piece who last featured on here almost exactly 2 years ago (https://justsomepunksongs.blogspot.com/2018/09/hung-like-hanratty-clampit-town.html). They return today with a track from their very fine new album Dragged Up. As we've come to expect from the band, what you get from the new record is really rather fun. Amongst the aural delights on offer we get frontman Al Sation complaining about how all the pubs are closing down and being replaced by car washes or shops (which isn't doing anything to assuage his thirst). Elsewhere he's taking a swipe at cyclists (tight lycra and a shiny hat, has anyone told him he looks like a twat), the Inland Revenue (declaring every penny, you're doing things right, then the bastard taxman goes and drops you in the shite) and vets (care about their money they don't care about the pets). They're songs that'll have you simultaneously grinning whilst riling you up about life's twats. It's not just about the lyrics though, the band, Liam Smith (Lead Guitar), Tezza (Bass), Ricky Barsby (Rhythm Guitar) Kyle Ellis (Drums) are on top form.

You can get the album on cd here : https://hunglikehanrattyofficial.bigcartel.com/product/new-dragged-up-album and it's streaming on "all major digital download sites."

I'll play a different song on this week's Just Some Punk Songs show (today at 8pm gmt details here : https://www.facebook.com/events/1244300275932576/ ) but the song I'm posting today is the one that features the distinctive keyboard sounds of the much missed Dave Greenfield. It's called Living For The Weekend and as well as closing the album, it'll also feature as the flipside to Hung Like Hanratty's next single which will be a tribute to Dave released on 31st October and titled Fly High With The Ravens. ...