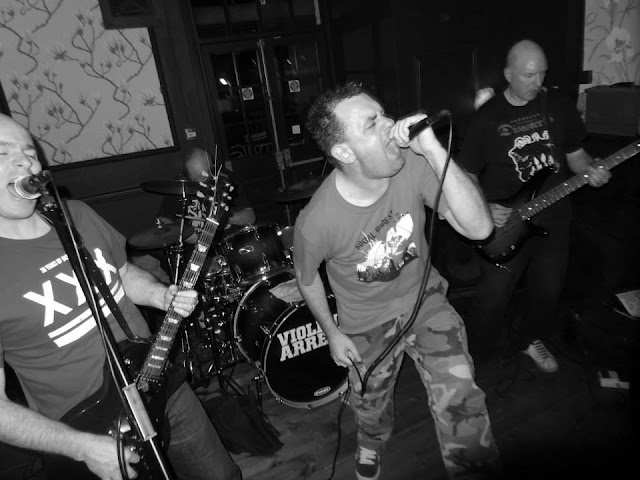 Violent Arrest are based in Bristol and formed in 2006 with the intention of playing old school 3 chord hardcore punk. Featuring members of a number of other bands (including Weston-Super-Mare hardcore outfit Ripcord), you can check their back catalogue out here : http://violentarrest.bandcamp.com/

Earlier this year they released their latest album, Life Inside The Western Bloc, on Boss Tunage Records, a taster of which can be found here : http://bosstuneagerecords.bandcamp.com/album/life-inside-the-western-bloc

The line up this time around sees the inclusion of Welly on vocals. A veteran of the UK punk scene, he's already featured on this blog with previous band Four Letter Word (http://justsomepunksongs.blogspot.co.uk/2015/08/four-letter-word-scared-of-dark.html) and will be back soon when he selects his 10 favourite songs. The band also comprises of Ed Varney (bass), Steve "Baz" Ballam (guitar) and Johnny Stix (drums). Former vocalist Steve Hazz features on the album's 11 bonus tracks that were recorded in 2013.

Angry and relevant, this is as good an example of modern day hardcore that you'll find, this song is from the new album and it's called Cold Front....