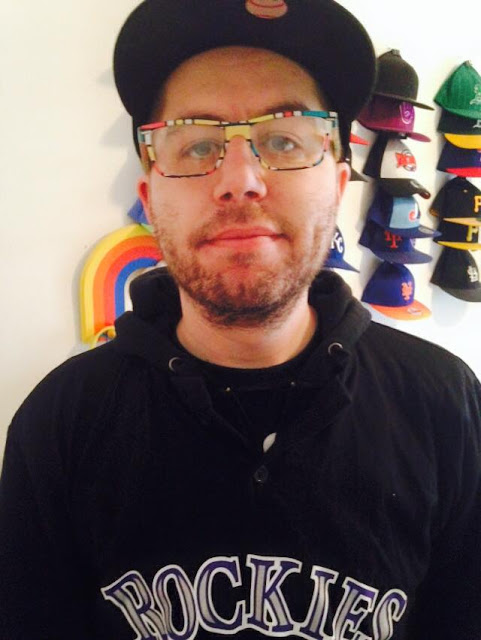 A big thank you today to Brandon Harrod, head honcho of Mooster Records, who's provided a kick ass selection of awesome pop punk tunes as his favourite 10 songs. As well as running Mooster he's also a singer/songwriter with several solo releases under his belt and he's performed in a number of bands including Modern Advances and The Larroquettes.

I'd originally intended to post a song today from one of Mooster's new releases but that will now get pencilled in for tomorrow but if you want to check out the label I'd highly recommend clicking on the following links :


You can tell Brandon loves his music from his enthusiastic commentary and so without further ado, here's his top 10 (a few of which I had to put on youtube so hopefully the bands don't mind)......


10. THE FRANTICS – “DOWNTOWN DELIRIUM” - fast, loud and snotty just the way I likes em! I was waaaaay late to the party on this one but I'm just happy to be there standing in the corner chugging Old Style.


9. SCRATCH BONGOWAX – “DOGPILE ON LIZ” - the world needs more bass driven, surfy, goofball punk. This track is obsessively infectious and mind numbingly dumb, but if you think that's an insult, you would be dead wrong.


8. THE PROMS – “SPIKE-A DA PUNCH” - Ohio based bow tie wearing punks give us a track that packs in equal parts pop punk and 1950's barbershop. If you love sugary pop and sounds ala the Beatnik Termites, these guys are your jam!


7. THE LOBLAWS – “TOSSING AND TURNING” - my Nashvillian buddies drop a perfect platter of poppy goodness, I love this track, only possible outshone by their later track "Maybe Maeby" but this track has one singular thing that "Maybe..." doesnt, a reference to Days of The New! More Patton/Funderburk collabs please!


5. THE CONNIE DUNGS – “SHINY METAL PISTOL” - anyone knowing my relation to The Connie Dungs (yeah thats mold growing on my Dungs demo tape, its that old) might think this track is a surprise pick, especially given that my label (Mooster Records) released the Dungs first album on vinyl for the first time (shameless plug). But, I stand behind this track from the b-side of the "No Chance" 7". I think the lyrics are spot on, the hooks are there and I recommend this as a perfect intro into the Dungs amazing set of tunes.


4. MORAL CRUX – “VICTIM OF HYPE” - "there's a new no name on the charts every fucking week , another no talent lame brain trendy and so meek, you ain't cool you ain't hip you're not out of sight, just another sycophant victim of hype" the first stanza into the chorus provides the very ideology, mantra, rules of why we are all into punk rock in the first place, the music industry full of no substance, nothing to say, no heart, no feelings has pushed us into the slums and in the gutter is where we will find all the records we love so much. Victim of Hype, the title track from the now legendary Moral Crux 7" on Mutant Pop is something to take to heart and something more people need to listen to while following their false idols into an abyss of terrible music. Shameless plug number 2: new Moral Cruz 7" on Mooster Records this month!


3. THE CATALOGS – “ANOTHER GIRL” - this track was of course made famous by The Queers on "Don't Back Down" and anyone whose not from Hawaii that says they knew the Catalogs did it first is probably a liar but that doesn't take anything away from this legendary track. Unfortunately The Catalogs never got their due because of their location but they should be listed here among the top pop punkers in the land!


2. AUTOMATICS – “HANGIN OUT AT EJs” - the first time I heard The Automatics I knew they were gonna be my favorite band on Mutant Pop, they packed all of the urgency of punk into a 50 second song and always left me wanting more. The Autos were more about what wasn't there rather than what was there, the Ramones taught us that rock n roll can be simple and is simple. The Automatics "S/t" album is a perfect punk record and a perfect pop record all rolled into a giant crunchy sushi roll. "Hangin Out at Ejs" is a pristine example of the collision of rock and pop. Harmonies abound and the guitar choogs right along providing a layer of warmth to wrap you up in. Included in this post will be the world premiere of the newly remastered version(by Mass Giorgini) of "Hangin Out at EJs" from the forthcoming 20th anniversary edition of The Automatics "S/t" on vinyl for the very first time on Mooster Records(shameless plug 3)   (quick edit ....the remastered version of EJ's isn't available yet but will either be added soon or will feature in an update of it's own)


1. AFTER SCHOOL SPECIAL – “KITTY CORNER” – the first time I heard After School Specials' CD I had taped it off of my friend Will’s CD and listened to it 5 times in a row. By the end of the day I knew every word. It spoke to me at a certain time in my life and it continues to speak to me today. David Jones wrote songs that put me inside of his experiences, he was a brilliant lyricist and gone waaaay too soon. The song “Kitty Corner” ranks in my book as one of the best pop punk tunes ever written, I always thought it was odd to sequence it at the end of the album but the more I think about it, the more it seems like a brilliant move. Its a perfect placeholder, bookend, finale or whatever. The song captures the life of being bored in a small town to a tee, where the only thing on your mind is girls. I grew up in a small town in Kentucky and seem to be an ideal target to live the life of a pop punker as illustrated in the story in David’s head. We miss you every day David. You're at the top of my list, brother.


For my convenience, the places I go are never﻿ too far apart Taco Bell is right next to the Dairy Mart
And please realize that I know you live down the block, but for me that's just a little, little bit too far to walk I think about you and wonder if we ever could have had it made, if only you had lived a little closer to the arcade I like to watch you when you walk down the street, a girl with motivation - hey, that's pretty neat But unless you get lost and you need to use my phone, my true feelings for you will never ever be known
To be with you﻿ I think I could walk on hot coals, but until they're near the record store it seems I'll never know I guess for now I'll just have to be satisfied knowing my heart's kitty corner to your soul.
It's not that I'm lazy, but it seems I always lose It's been two weeks since the last time I left my room My friends call me and say it's time to go outside, but then I might miss the chance of seeing you walking by They say my priorities are rotten and I should get out of bed, but the clock says it's only 3PM and you're still in my head.
At least I have ambition, direction in my life, to make what's-her-face from down the road my wife. Now I see you through my ripped and tired window screen, arm in arm with some new guy, I never thought love could be so mean To be with you I think I would have walked on hot coals, but since they were never near Aero Hobbies I never got to know So I guess I will just have to﻿ be satisfied knowing
My heart's kitty corner to your soul