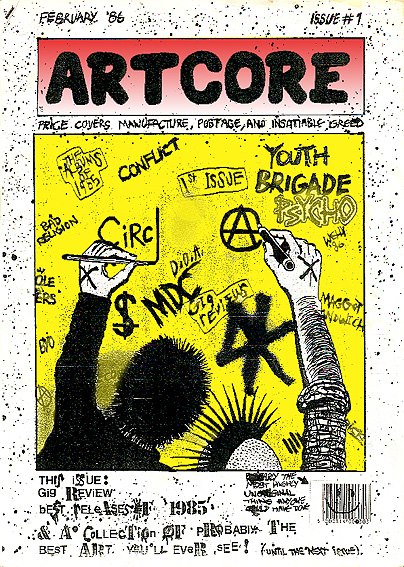 Following on from yesterday's update, Welly, the lead vocalist of Violent Arrest has been kind enough to submit a top 10 list. He previously featured on this blog with his old band Four Letter Word. Aside from a long career fronting great punk acts he also edits Artcore Fanzine (http://www.artcorefanzine.co.uk/). First published in January 1986 it's one of hardcore punk's longest running publications.
As the job of condensing a long running love affair with music down to a mere 10 selections was an impossible task, Welly's top 10 will focus on newer songs from bands that have appeared in the fanzine.

JUST SOME PUNK SONGS – WELLY ARTCORE
Even though I ask every band the dreaded ‘five albums’ question when interviewing them, it’s pretty much impossible to narrow music down to shortlists. So with that in mind, I had to place in some parameters on this, or risk losing my mind. So, here are ten great songs that have grabbed my attention since the turn of the 21st Century, by new bands who I’ve interviewed and have appeared in the zine Artcore, usually as a result of hearing these stop-in-yer tracks. Anyone can trot out a list of classics of yesteryear with the caveat ‘this could all change tomorrow’, so in the spirit of new (ish) music, here’s some examples of how and why punk rock can be just as vital as it ever was, and also a hello to all those who say ‘modern bands can’t write songs’.


SMOGTOWN – I AM THE CANCER (US / 2000)First up is SMOGTOWN. I first heard these Southern Californian beach punks on their 2000 album ‘Fuhrers of the New Wave’, that this opener is from. In the year 2000, I asked old pen pal Mike Clarke of Inflammable Material to recommend me something I’d not heard, and he recommended this. Needless to say, I was hooked. What is so good about this band, even though for some reason they continue to be largely overlooked, is that they brought back that old Californian punk sound without being derivative. And while you can hear that signature geographical sound, they are completely their own band. This album was a concept record, recorded by Duane Peters, but in the process, all the songs got rearranged, slightly skewing the beach gang theme. A lot of the other songs on this record are just as outstanding such as ‘Neighbourhood Brat’, but not much of this album is on YouTube so...


STRIKE ANYWHERE – CHORUS OF ONE (US / 2000)
The year 2000 also brought to the world STRIKE ANYWHERE from Richmond, Virginia. Incendiary hardcore full of passion and soaring choruses, and from the get-go on their debut 12”, the opening shouts from this title track definitely woke you up after half a decade of tepid pop punk, and all slap-bang in the middle of a tedious trend of self-indulgent emo; “To live in discontent, anti-establishment. Not by words, or by fashion, by nature. Since the day we were born, if we just look inside each of us, a thousand rebellions sleep.”


DFA – DESTINED FOR ASSIMILATION (CAN / 2002)
DFA from the wilds of Manitoba, that brought us the likes of PERSONALITY CRISIS, STRETCH MARKS and THE UNWANTED, three names that should be recognisable to anyone who ever bought a few BYO records. But DFA took their hardcore velocity to another level, creating a ripping thrash that was both sharp as a tack, and came with questioning lyrics. On ‘Destined For Assimilation’, they say; “this scene has opened my mind, taught me to think, changed my life” and asks about what happens as you get older. Although hardly ever mentioned, DFA were up there with all the other great new bands of the turn of the century such as TEAR IT UP, LAST IN LINE, THE RITES or HOLIER THAN THOU?

SHOT BAKER – SORRY ILLINOIS (US / 2003)
If there was modern band that could claim genuine inheritance of the classic Chicago punk sound of old, then it was SHOT BAKER. Mixing the tough working class UK approach of bands like THE EFFIGIES with the soaring anthems of NAKED RAYGUN, then here you have it. On this one, they tackle that age old youth dilemma of wanting to pack up and skip town; “I’m sorry Illinois but I’m leaving, I’m dreaming, I’m gone.” And this was before their two great albums.


STRUNG UP – DEATH BY COP (US / 2004)
The San Franciso Bay Area’s STRUNG UP were straight out of the gate with a belting hardcore 7” on Kangaroo Records, quickly followed by an album ‘Society Rot In Hell’, and this song featured on both. Handling the timeless punk subject of police, you can hear the strains of other old bands of their locale such as MDC, BAD POSTURE and VERBAL ABUSE. This band had so many great rippers, it’s hard to pick just one, and it could just as easily be skate shredder ‘Christ Air Not Christ’. STRUNG UP stood shoulder to shoulder with the other killer bands of this time such as NIGHTSTICK JUSTICE, DOUBLE NEGATIVE, KNIFE FIGHT or VIOLENT MINDS.


CAPITAL – ON A MISSION (US / 2007)
Long Island’s CAPITAL really stood out in an era of metallic hardcore, as they mixed in the tough no nonsense crunch of locals KILL YOUR IDOLS with all the passionate melodic delivery of bands like AVAIL. This song really captures the imagination of anyone who ever discovered the underground, as it talks about something anyone involved can relate to; “it was seventeen years ago, there were three of us. In combat boots, we missed the bus... We were on a mission, to get some records, get some music, get some zines. The people in the store were older, I could tell they were onto something. And now I spend half my life, just chasing that excitement, of hearing something new.” Exactly.


BURNING SENSATION – TERMINAL DECAY  (AUS / 2010)
When I first heard Australia’s BURNING SENSATION, I was so taken aback that this song became the title for an international compilation that soon came out with Artcore, of which this link is sadly the only on YouTube, so apologies for the advertising. The tension in this song is palpable, harnessing that fine art of falling apart. With lyrics about inevitable demise, this dark post-punk slow burner mixes the likes of WIPERS and SORRY. The fact that the rest of their only record, is ferocious hardcore more like DEEP WOUND makes it even better.

NIGHT BIRDS – PROGNOSIS: NEGATIVE (US / 2010)
You’d think that this bunch of skate brats would be from nowhere other than a beach community in eighties California, but no, they’re from the East Coast. Unashamed Dick Dale guitar rides atop scorching hardcore punk of the DEAD KENNEDYS meets AGENT ORANGE with ADOLESCENTS harmonies variety. NIGHT BIRDS sound like the end result of all those great bands of the last decade or so such as GOVERNMENT WARNING, CAREER SUICIDE, VOID CONTROL or DEEP SLEEP.


ENDLESS GRINNING SKULLS - ENDLESS GRINNING SKULLS (2011)
Nottingham’s ENDLESS GRINNING SKULLS, featuring members of a whole slew of other bands, show what experience can be easily translated into. Their theme tune, takes a RUDIMENTARY PENI style riff and adds a thin layer of crust, but trains a keen eye on that long line of U.K. anarcho bands that were more about substance than how dirty their jeans were. And as a result, the grinding tension of this one will continue to rattle in your brain long after it’s finished.


DIE – LIFE IS HATE (UK / 2013)
This brings us to DiE, which are flag bearers for all the new hardcore bands coming out of the U.K. Complete and total nihilism set to overloaded guitars and oompah stomp. Sounding like an old Mid-West (such as THE FIX) or Boston hardcore (such NEGATIVE FX) band, they completely nail the template of straight forward old hardcore, whereby you could remember individual songs, amidst a blur of speed and distortion. Hear this, then seek out their two EPs to date.