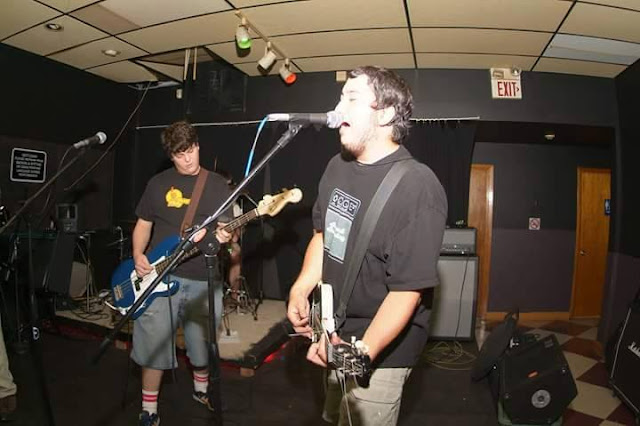 Another great top 10 today, this time around my thanks go out to Mike Patton who's submitted a list that will appeal to fans of power pop and pop punk. Mike's featured on here before with his band Vista Blue, you can snap up their excellent recent ep here : https://wearevistablue.bandcamp.com/album/grand-slam.

Top 10 Pop-Punk Songs That Have Inspired Me to WriteIf you've ever heard any of my bands (Vista Blue, The Loblaws, The Robinsons, etc.), then you know that my music leans way more to the "pop" side of "pop punk." We're mainly inspired by the Beach Boys and Beatles, I guess. And even though we loved being a part of the New Orleans DIY punk scene, I think the term "power pop" describes us just as well as anything else.So I know I'll blur the genre lines with my top 10 pop punk songs that have inspired me as a songwriter, but here's a list anyway!


10. The Decibels - Poor SidneyThe Decibels are definitely power pop, but we listened to them a lot when we first started the Robinsons, along with a heavy rotation of mostly pop punk stuff. And not that you'd be able to tell due to our lack of execution, but they even gave us some great advice about home recording and guitar sounds when we were recording one of our first albums. Their whole Big Sounds album is wonderful.

9. Ashtray Babyhead - Elaine, ElaineAlso not a pop punk band, but I always saw them as a more pop punk version of Weezer, one of our all time favorites. I loved their melodies and chord changes, and I can point to several of my songs directly inspired by their first two albums. (You may have heard of this same band as The Kicks, after they randomly decided to change their name while on tour with Superdrag.)


8. Groovie Ghoulies - Tunnel of LoveWe played with the Ghoulies in 2000, and I hadn't known a lot about them. But I immediately fell in love with their blend of horror, pop punk, positivity, and fun. I think they helped open us up to the idea of writing lyrics about the things we enjoyed.

7. Travoltas - Pray For SunThe Travoltas blew us away with amazing melodies and harmonies on each and every track.


6. Kung Fu Monkeys - Last Day of SchoolI was also way late to the party when it comes to KFM, and it's been one of my biggest regrets. When we first met Timbo from Mutant Pop and agreed to do the Loblaws record, he sent me all of the KFM stuff he had, and it's all I listened to for months. While we're not writing as much pop punk these days, I know James's music would've inspired me to write better pop punk songs if I'd discovered it years earlier. It's a shame this band didn't get more recognition.
(I wrote a sequel to this track for the Robinsons' Sunflower album in 2010. You can find it here: https://rttb-records.bandcamp.com/track/we-broke-up )


5. Second Saturday - Forty-Nine PercentThis song is written by Wyatt, my Loblaws bandmate. We met on AOL and became great friends, and this is the first song he sent me. It was originally recorded by his Mississippi band, the Pendletones. This version is by Second Saturday, which also features Todd from Vista Blue/Loblaws/Robinsons. Wyatt is the best songwriter I know, and even if most of his stuff is not pop punk either, he's constantly helped me step up my game.


4. Huntingtons - Growing Up Is No FunThis was one of those times that I bought an album at Tower Records just because of the cover. In this case, they guy was wearing an MTX shirt, which settled it right there. I couldn't believe how good it was! A band that wrote about fun stuff, kept it simple, and sounded GREAT. Within a week or so, we tracked down their whole catalog and devoured it.


3. The Queers - I Can't Get Over YouThere's not much to say about the Queers. Like us, Joe was the ultimate Beach Boys fan and didn't care if people respected that or not. His pop songs are the best there are in pop punk.


2. MTX - With My Looks and Your BrainsI might never come close to his level, but Dr. Frank is my constant reminder to make the lyrics mean something to someone, even if it's just me. My goal is usually to make the lyrics fun or to make a song get stuck in someone's head. Dr. Frank nails BOTH every time, and it's scary.


1. Ramones - 7-11There's a chance that none of the songs on this list would even exist without the Ramones, right?