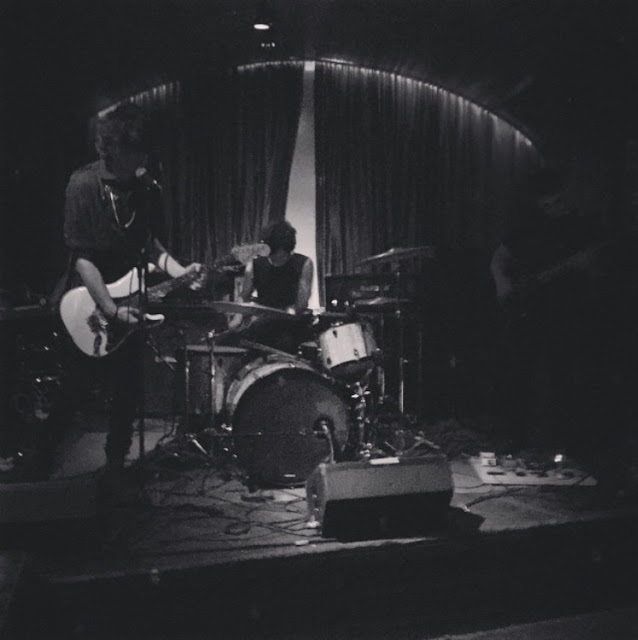 Public diplomacy in Israel (also hasbara) (Hebrew: הַסְבָּרָה‎ hasbará, "explaining") refers to public relations efforts to disseminate abroad positive information or propaganda about the State of Israel and its actions.

Something a couple of shades darker than normal today from Haldol, a band who's music attracts labels such as goth, post punk and deathrock.

Formed in 2011 in Nashville by Geoff Smith and Joey Cantrell, they're now located in Philadelphia and feature Smith (guitar/vocals) alongside Matt Martin (bass) and Aaron Muchanic (drums).

They announced themselves shortly after getting together with a 6 track demo and released their debut album, The Death Drive, the following year. There's also been the Exhumed Songs ep, a second demo and a live ep but it's with the release of this years self-titled ep that they came to my notice. Attracting comparisons with band such as Rudimentary Peni and The Chameleons it seems to have the reviewers salivating. You can check out what the fuss is about on their Bandcamp :  https://haldol.bandcamp.com/album/self-titled-45-lp

Commenting on U.S. foreign policy in the Middle East and asking how many people have to die for a Jewish State, this is Hasbara.....


Experiencing bloodshed allows you to wield bloodshed, And the tortured surely know what shrieks can wake the dead. As they pinkwash themselves, they wash children in red; Trumpets don't tear down Jericho's walls, it's missiles, instead. The terrorist title is reserved for the civilian, While "terrorized" rarely die, genocide receives justification. Land is land, and land is commodity, And those who obstruct capital are deserving of cruelty. The United States raises its children by example. When oppressed fight oppression, you give them more oppression, You can shroud it in religious rhetoric obsession. Resistance simply painted as race hate, How many have to die for a Jewish state?