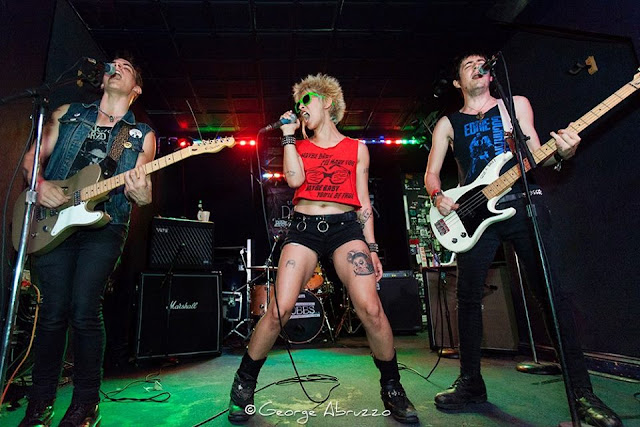 First time on Just Some Punk Songs for one of the most exciting new bands that I've heard for a while. Posers are a snotty 4 piece from Philadelphia, Pennsylvania who recently released their debut, Self Titled, ep.

They describe their sound as being similar to what The Buzzcocks may have sounded like if they'd formed after attending a Minor Threat gig as opposed to one by The Sex Pistols. (And if The Buzzcocks had featured a female vocalist!)

The aforementioned vocalist, Jade Baisa, in an ideal world will go on to be mentioned in the same breath as some of punks most lauded frontwomen. Far from being a one (wo)man band however, Posers also feature the talents of Rory Cain (guitar/vocals), Johnny Mick (bass/vocals) and Brian Bullock (drums).

I could drone on a bit longer saying how great they are but you'd be better off just downloading the ep and finding out for yourselves : https://weareposers.bandcamp.com/

This is the video for the lead track, it's called Nothing.....

You sit on your high horse with your nose up at the world
It gives you NOTHING
A slave to NPR you think your views are who you are
But you are NOTHING
Pseudo Intellectual, you're so interesting
But only to yourself
You wanna change the world but not your attitude
And therefore you are NOTHING
Pretentiousness and passion are the downfall of your faction
You learn NOTHING
You've got big ambitions, bullshit politicians
Take your trendy, pompous, first world, freshman year beliefs on life
And shove 'em up your ass