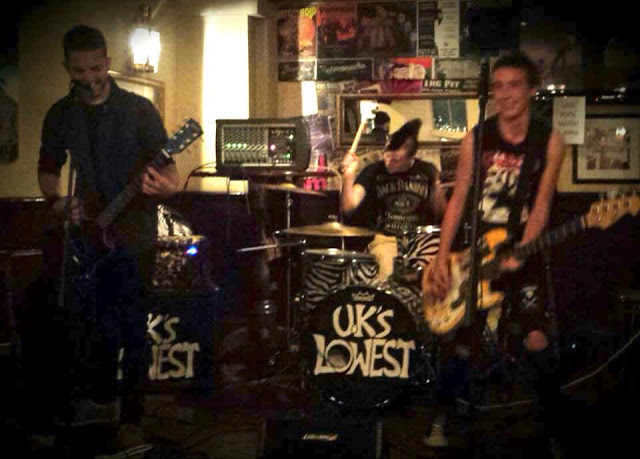 U.K's Lowest are a trio who met at school before getting together, initially as a covers band, at the beginning of 2013. Quickly progressing to writing their own material they've been pretty prolific, by August they'd released a single (This Side Of Town) and they followed it up with a debut s/t album and a 2nd single (Arrest Me).

Plenty of gigs followed including high profile bills with top acts such as Anti Flag, UK Subs, Buzzcocks, GBH, Anti-Nowhere League, Subhumans, Penetration and The Outcasts. Drummer Will also started up their own label, U.K's Lowest Records as an outlet for their music.

Continuing their upwards trajectory, 2015 saw the release of the Independent Essentials single and most recently, sophomore album, City Sound. You can check it out here : http://uks-lowest.bandcamp.com/album/city-sound.

Featuring Callum Archer (guitar/vocals), Will Squier (drums/backing vocals) and Ben Bishop (bass/backing vocals), they take from their influences (Anti Flag/Green Day/The Clash/Sex Pistols/Rancid) and add their own twist. If you're looking for a decent new band to check out then I'd recommend you give these guys a listen.