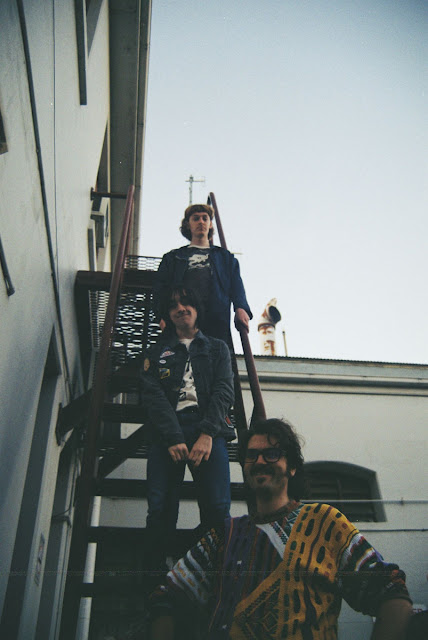 Last year I featured "a short blast of cool as fuck scratchy punk goodness" (https://justsomepunksongs.blogspot.com/2019/09/disco-junk-mutual-hate.html) by a Melbourne 3 piece called Disco Junk (https://www.facebook.com/discojunkband/) but truth be told I didn't know much about them other than they started out as a one man project featuring Billy Twyford (aka Billiam https://hiimbilliam.bandcamp.com/). They seem to have settled on a more permanent line up now with Billy being joined by Tom Whyte (bass) and Ruben Riley (drums).

There's currently a busy production line of snotty young punk bands coming out of Australia but Disco Junk are one of the best. Last year's Underage Punk ep featured 4 scuffed up garage punk rippers that were as good as anything from that country in 2019 and lovers of everything lo-fi and snotty will be more than satisfied with their energetic new single. It'll be available in September on vinyl on a split 7" with another of Billy's bands, Collective Hardcore, via Goodbye Boozy Records.

You can get it digitally now : https://discojunk.bandcamp.com/album/im-no-good-with-numbers-but-i-know-which-tram-im-on-7-inch-out-september

Fast and frantic with squealing guitars and lyrics that rail against the suppression of diverse voices this is a rollicking good song. It's called I'm No Good With Numbers but I Know Which Tram I'm On...