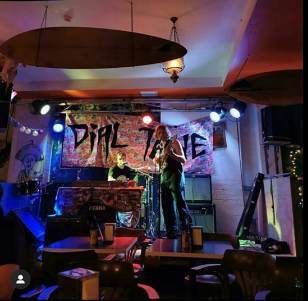 
One of the songs I've enjoyed most recently is a new one by Daughter Bat And The Lip Stings. It also proved very popular when I played it on this week's Just Some Punk Songs show show and so as I knew very little about the "band" I asked listener Billy Ouka (aka Slug Butter vocalist (https://www.facebook.com/Slug-Butter-1289415334489121/) Simon Geddes) if he fancied writing this update. He did a bit of research and even went out of his way to contact the man behind Daughter Bat, Angus Lewis, and this is what he came up with...

"Similar to everything else but also a bit different :-) rock and roll babeh!"


Daughter Bat is a one dude setup, who lives in rural NSW near Wollongong. Formally in a band called Fruit Bat, been going since late 2019, Daughter Bat have been releasing a steady stream of DIY bedroom punk classics, with the latest from the single Love Songs, Preemptive Strike, a slice of garage egg punk magic, with a killer hook and an infectious organ, with the B-side sounding like a an outtake from a Mo Tucker recording session. Featured in issue 4 (https://magneticvisions.neocities.org/issuefour.html) of Billiam's    (https://hiimbilliam.bandcamp.com/) excellent zine Magnetic Visions (https://www.facebook.com/Magnetic-Visions-101613498260340/) and released on his label Under Heat Records, with hopefully a split 7" being released in the near future. (https://underheatrecords.bandcamp.com/music)


"Well my main biggest influence would be the big Sydney names like gee tee and anything ishka is a part of because he is god but I also just love the classic early weird punk stuff. I look to early eggy punky bands for more of general feel though as a pose to actual sound. As far as future plans go I just really want to keep recording eps and playing any gig I get offered to be honest. As for bands I’ve recently been listening to, lots of blondie, bit of gg allin, the new “grand finale” ep is amazing and I’ve had the hacker demo on repeat for a while now but yeah, apart from that just a healthy mix of pop and rock and blah blah. As far as a secret for the sound goes I really can’t tell you, I’m very inexperienced with recording, just wack it into the 4 track because it’s super straight forward, bung it onto the computer, slap it onto the web babey" Angus Lewis (Daughter Bat)


You can get Love Songs "name your price" here :   https://daughterbatandthelipstings.bandcamp.com/

This is Preemptive Strike...