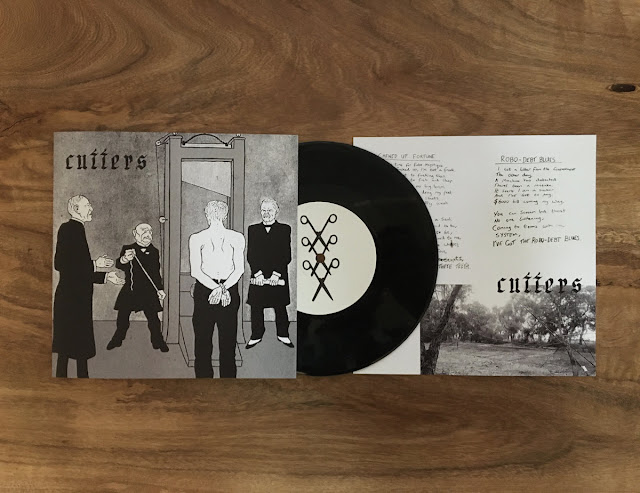 When I posted Australian band Owen Guns yesterday I mentioned how well they'd gone down with the folk in the chatroom for this week's Just Some Punk Songs show. The band that got the best reception though was their fellow countrymen, cutters. Unknown to me before last week, I'm guessing they're a pretty recent addition to the punk scene and if so, they've certainly made their mark with their new Self Titled 3 track ep.

They're from Melbourne, they line up with Al (vocals), Tim (guitar), Stringer (bass) and Max (drums) and they're somewhat of a noisy proposition. The song I played on the show is the lead track on the ep, it's titled Chewed Up Fortune and it's a relentless 3 minute adrenaline rush of pounding drums, wailing guitars and shouted vocals. It reminds me a little of another Melbourne band, Clowns. Next up is a short sharp hardcore blast railing against debt collectors and faceless bureaucracy and things conclude with a 5 minute epic about an oncoming storm that's taking barns, taking lives & forcing families down to their basements. Like the band themselves, it's an explosive force of nature so batten down the hatches.

It's recorded by Redro Redriguez and as with pretty much everything I feature from Australia it's mixed and mastered by the ubiquitous Mikey Young. It's available on 7" black vinyl (ltd to 150 copies) and digital download : https://cuttersmelbourne.bandcamp.com/album/cutters

This is Chewed Up Fortune...

Got no time for false mystique,
I'm not fucked up, I'm not a freak, I just want to fucking sleep, I just want to fuck and sleep, small steps only, no big leaps, drag my knuckles, drag my feet, roll me in designer sheets, roll me now I'm pretty weak. Got the time so take a seat, this ain't where I planned to be, it's just where I happen to be, not too sure what's happened to me, the days are turning into weeks, I just want it all for free, no returns, there's no receipts, fortune's chewed up in these teeth.