The Subjunctives - At The Kraken (Guest Review By Rich Cocksedge) 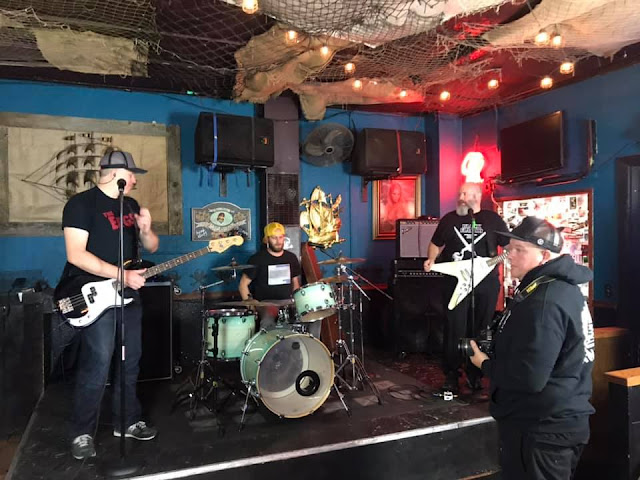 Rich Cocksedge is very kindly on a busman's holiday on Just Some Punk Songs today as instead of his usual reviewing duties for Razorcake (http://razorcake.org/) he's agreed to say a few words about one of his favourite releases of the year. Before I pass you over to him, can I just say that after hearing today's song, and seeing the video at the bottom of the page, I love this song so much, the vocals are wonderful and I too very much want to go to The Kraken....

The Subjunctives are a bunch of guys from Seattle, all of whom have a penchant for the kind of punk rock that came from bands like Stiff Little Fingers and Hüsker Dü, and who have just released their first album, the excellent “Sunshine and Rainbows”.

The trio consists of Ean Hernandez (also in Sicko-one of the best pop punk bands ever-and the head honcho of Top Drawer Records) along with Jeff Mangalin (Four Lights) and the younger Matt Coleman, who has also been in the Heather Edgley band.

The album follows on from the EP released almost a year ago and it showcases a wonderful ability to write crunchy melodic punk songs that definitely bring to mind the aforementioned illustrious bands. Such is the love for the Minneapolis trio from this Seattle outfit that much of their merchandise is New Day Rising connected in terms of design. (They also have a shirt which is a homage to the Subhumans, UK version).

It’s not just the music that is of a high quality on this album, but the lyrics too are above the average offerings, drawing the listener in to different situations and ensuring that it’s a full blown aural experience.

The album was mixed by Matt Allison who has worked with the likes of Alkaline Trio, Lawrence Arms, Less Than Jake and The Copyrights to name a few, and it was mastered by the legendary Mass Giorgini who has worked with so many class acts that it’s impossible to whittle them down to just a handful as examples. With people like that on board, the output is always going to have a strong sound.

The featured song here, is off the album and it’s one which highlights. It's a tribute to a local punk rock dive bar in Seattle, The Kraken. The song is entitled ‘At The Kraken’ and it’s a cracker.

I want to go to The Kraken. I want to see The Subjunctives play at The Kraken, and if Sicko could headline then that would be perfect....