The Nips - So Pissed Off 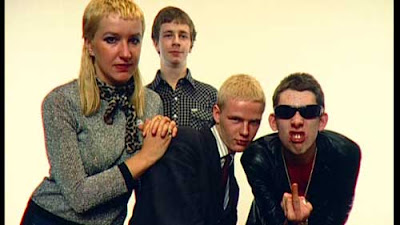 The Nipple Erectors, (who in 1978 changed their name to the more radio friendly moniker The Nips) formed in London in 1976 by bassist Shanne Bradley and are best remembered nowadays for featuring the vocal talents of notorious ear biting punk Shane O'Hooligan. I'm sure you all know he changed his name to MacGowan and went on to form Pogue Mahone, who became better known as The Pogues. As for Bradley, she went on to co-found The Men They Couldn't Hang. Before they went their seperate ways however, the band (who's original  line up also featured guitarist Roger Towndrow and drummer Arcane Vendetta) released a string of impressive singles (King Of The Bop, All The Time In The World, Gabrielle and Happy Song) as well as a live album called Only The End Of The Beginning (an anthology called Bops, Babes, Booze and Bovver was posthumously released in 1987 by Big Beat Records). Another famous name to be associated with the band was future Culture Club drummer Jon Moss who had a brief stint on drums before they split.

If you want to read more, there's a several good interviews online, including these : http://www.punkglobe.com/shannebradleyinterviewmay08.html
http://www.punk77.co.uk/groups/nippleerectorsshanneinterview.htm

Today's song is an outtake which didn't make it onto any of the singles but was added to the 1987 anthology, this is So Pissed Off....

Email ThisBlogThis!Share to TwitterShare to FacebookShare to Pinterest
Labels: 1987, punk, The Nips