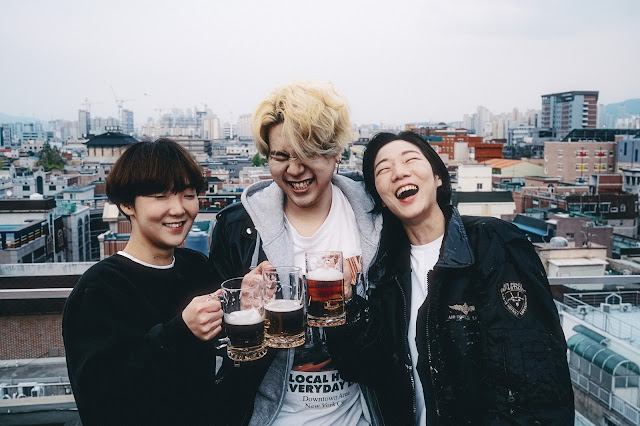 We're staying in South Korea today...
Drinking Boys and Girls Choir (https://www.facebook.com/band.drinking) are from Daegu, a city in North Gyeongsang Province and feature a line up of Myeongjin Kim (Drums/Vocal), Meena Bae (Bass/Vocal) & myorori (Guitar/Vocal).
They formed in 2013 when two drummers that were sharing a rehearsal space (MJ & Meena) decided to form a band. Meena switched to bass and after answering an ad, Bondu joined on guitar. The next 8 years saw the odd line up change, some impressive releases and plenty of drinking. They play a mix of up tempo melodic punk with a hint of hardcore and if you're new to them I suggest you start with their excellent 2019 album Keep Drinking (this track being a particular favourite :  https://www.youtube.com/watch?v=bdiNHI9QbMY).
Next month will see a welcome return as they release a new album. It'll be titled Marriage Licence and they say it was "written and recorded under the stress of a pandemic but also a tidal shift in Korea, this is a little more grown up, less playful second album... Their politics are fiercer, they reflect on their outrage at the Nth Room Case, there is wider questioning of gender roles and the patriarchy as old views and assumptions are called out and tossed in the bin. Marriage License reflects a band who don't feel it's a time to mess about. They have honed their chops and know their targets." 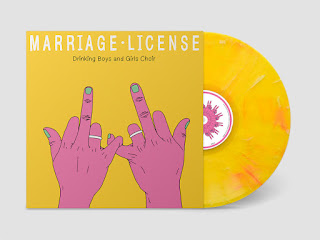 It'll be available on limited edition vinyl (Yellow marble effect colour vinyl. In spined, printed sleeve, with printed lyric insert.) via Damnably and Electric Muse and on digital download. You can pre order and stream a couple of teaser tracks here : https://band-dbgc.bandcamp.com/album/marriage-licence
This is a cool live version of one of those songs, it was filmed at SXSW Online 2021 and it's called Odoby...
Posted by mickfletcher at 01:30