The Men That Will Not Be Blamed For Nothing - Baby Farmer 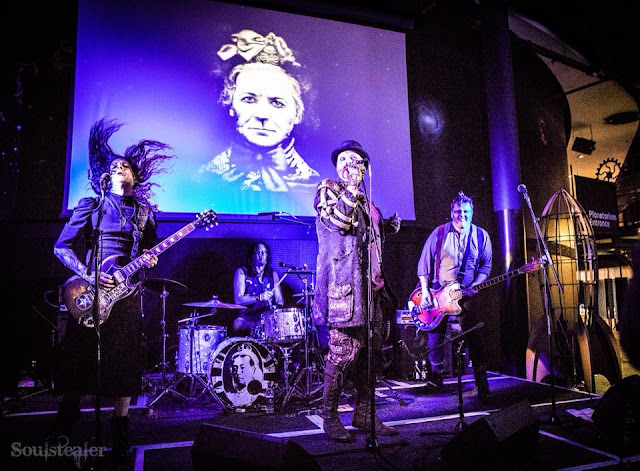 A return to the blog today for London's Victorian steampunks The Men That Will Not Be Blamed For Nothing. In previous updates I've told you that they formed in 2008, took their name from chalked graffiti left by Jack The Ripper and given you their line up so if there's anymore info you want check their Facebook page : https://www.facebook.com/blamedfornothing/

They reappear here today (emerging like spectres from a thick, swirling Victorian smog) due to the release of their new album. It's titled Double Negative and it's out now on Leather Apron Records on vinyl, cd and download....  https://blamedfornothing.bandcamp.com/album/double-negative

The album is similar to a collection of penny dreadful short stories with topics covered including the likes of serial killer Jack The Ripper, grave robbers Burke and Hare, the sexual proclivities of Queen Victoria's son Bertie, Polish physicist & chemist Marie Curie etc. Definitely a must listen for those who like their music with a dash of ghoulish relish.

The song you'll find below concentrates on the crimes of Amelia Dyer. She was a midwife who was hanged in 1896 and is considered to have been Britains most prolific serial killer. You can read about here here :  http://www.independent.co.uk/news/uk/crime/amelia-dyer-the-woman-who-murdered-300-babies-8507570.html

Email ThisBlogThis!Share to TwitterShare to FacebookShare to Pinterest
Labels: 2018, hardcore, horror punk, punk, steampunk, The Men That Will Not Be Blamed For Nothing