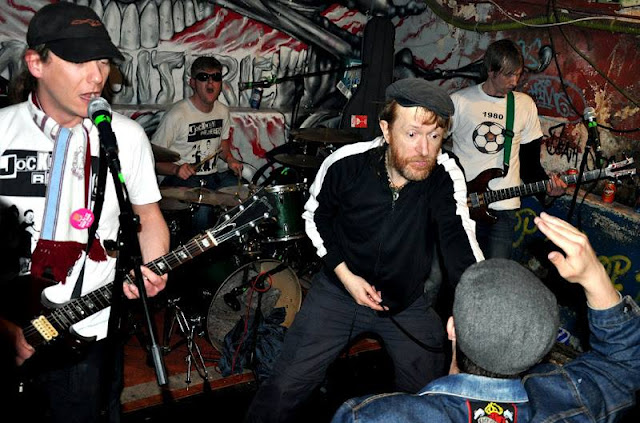 "FACISM IS A FUCKIN' DISEASE WE MUST UNITE TO ERASE"

A new video today from Scottish Anarcho-Punks Oi Polloi that calls for the rising tide of facism to be rebuffed with a kick in it's snarling, hateful face. Comments that the lyrical content on this song is less cerebral and more primitive than is the norm for the band is agreed with to a point but it's pointed out that violent confrontation is only one part of a multi pronged attack aimed at rebutting the current rise of the far right. As they comment, instead of encouraging nazi boneheads be kicked in the face, they could just have easily have said "the rising tide of xenophobia and increased far-right agitation necessitates a unified and comprehensive antifascist physical response." Whichever way they put it, they've got their message across and the addition of a powerful video helps emphasise things nicely.

As you'll probably know, Oi Polloi began life in Edinburgh in 1981 as an Oi! band but over time have become classed more as anarcho-punk, supporting direct action on environmental issues, hunting, racism, sexism, homophobia, facism and imperialism. There's been numerous line up changes down the years with vocalist Deek Allen being the only constant. Earlier this year they released the Saorsa album from which today's song is taken (it also features on the No One Is Illegal split ep with Anti-Bastard). You can get more info here :  https://www.facebook.com/Oi-Polloi-Official-204143832251/

Hitting out at right wing bullshit and mixing footage from movies such as Imperium and V For Vendetta with real life footage, this is The Face.....