Now this is fun...
When you were all sweltering in record temperatures earlier this week, did any of you spare a thought for those amongst us with an aversion to sunlight? That's right, the goths.
Well it seems on the evidence of the video below that they've been doing just fine.
Walter Sickert & The Army Of Broken Toys (https://www.facebook.com/WalterSickert) are new to me though I'm not sure why as they appear to have released a vast amount of music (which I will be dipping my toe into on Bandcamp). They're from Boston and on their current single they line up thus :
Walter Sickert (Vocals, Guitar, Piano, Samples)
Mary Widow (Vocals)
Rachel Jayson (Viola)
Matt Zappa (Drums, Percussion)
Mike Leggio (Electric Bass)
Jojo Lazar (Ukulele, flute)
Brother Bones (aka Blake Girndt) (Guitar)
Edrie (Melodica, Broken Toys)
Wednesday Alice (Inspiration) 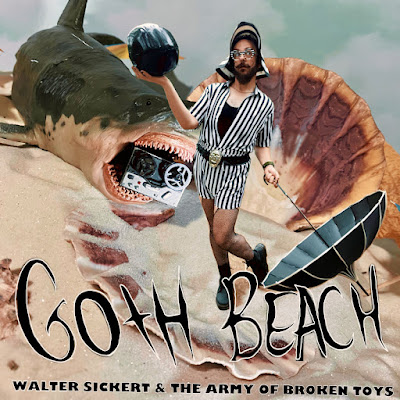 The single is a whole heap of fun. It seems to have been going down a storm with impressed punters comparing it to Rock Lobster and calling the band The B-52's of darkness. Namechecking the likes of Robert Smith, Siouxsie Sioux, Bauhaus, Christina Ricci and Elvira it's an absolute joy. Snap it up as a name your price download here : https://armyoftoys.bandcamp.com/album/goth-beach
This is Goth Beach...
Posted by mickfletcher at 23:46