Tear Up - King of the Car Park 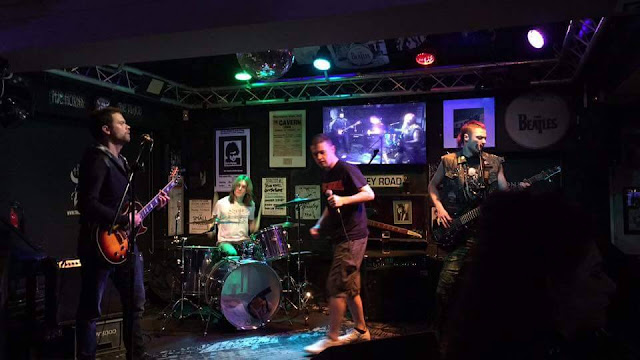 Tear Up are from Watford and claim to be the worst Oi band in the country. Today's song will prove that claim to be a load of bollox. Interested in combining a fondness for drinking with a passion for making a lot of noise about the things that piss them off, this is a band that wears the term "hooligan rock n roll" like a badge of honour. Their fuck you attitude has helped make them one of the UK'S resurgent Oi music scene's top new bands.

Now lining up with Jamie on vocals (check back tomorrow for his 10 favourite songs), Charlie (guitar), Andy (drums) and Sam (bass), they've already released an ep called Fuckin Av It and they're about to unleash debut album Playground Politics. It'll be out soon on Subcultz and you can preorder it here : http://www.subcultz.com/product/tear-up-album-pre-release-order/

Given that Jamie admits to having been a bit of a scallywag growing up and spent some time at her majesty's pleasure I'm probably not going to be far wrong in guessing the album will be a gritty affair with much of his song writing based on personal experiences. Despite settling down a little now that he's got a son to look out for, he's still not adverse to getting into the odd scrape if he sees something going down that he percieves as an injustice. For overseas readers who might not know, tear up is slang for a violent struggle using physical force. Quite apt really.

To whet your appetite for the new album, this is the excellent King Of The Car Park......

Email ThisBlogThis!Share to TwitterShare to FacebookShare to Pinterest
Labels: 2017, oi, punk, Tear Up