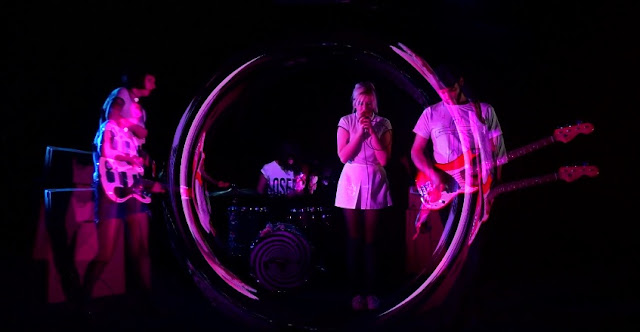 "They say Mary Bell was an angry child who wanted to hurt someone, and that’s what she did when she killed two innocent young boys. Razor sharp, ripping scissors, our aim is to fulfill her legacy. Think raw girl vocals, dark fuzz, post-punk, grunge and dissonance. We are angry children and we want to hurt you."

In 1968 a young girl named Mary Bell strangled to death 2 younger boys in Scotswood, Newcastle Upon Tyne. She was convicted of manslaughter and imprisoned until 1980. Since her release she's lived under a series of pseudonyms and in 1998 she collaborated on a book which detailed the abuse she suffered as a child at the hands of her mother. Now she has a band named after her.

Mary Bell are a Bikini Kill influnced feminist punk band from Paris who recently followed up their 2015 s/t ep with a s/t debut album which is on Danger Records and Le Turc Mecanique. You'll find both those releases "name your price" here :  https://marybellftw.bandcamp.com/


The line up is comprised of Alice Carlier (vocals), Tristan Bardre (bass), Victoria Arfi (guitar) and Gailla Montanier (drums). As with the child killer whose name they appropriated, their music rages with anger, and the song you'll see below sees that anger backed up by a wonderfully threatening bassline that is a must hear.

When I was a little girl