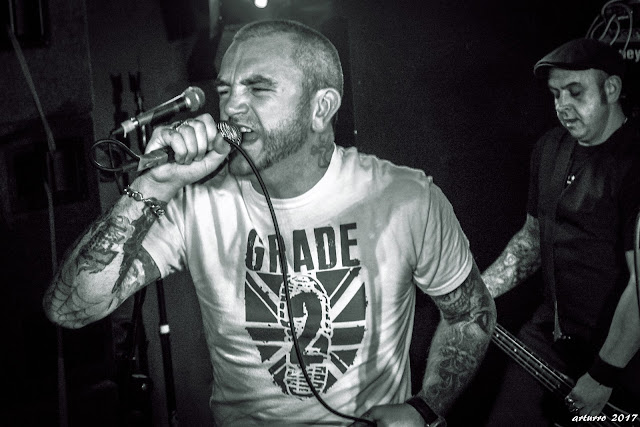 You may have noticed I posted the new video from Plymouth band Arch Rivals (watch it here if you haven't yet seen it : https://www.youtube.com/watch?v=gbvRig1R574). It proved so popular that I asked vocalist Mike Brands if he'd like to submit a list of his favourite songs and quicker than you can shout Oi! Oi! Oi! he sent me the Top 10 that you'll find below.

Their video is for a new song, also called Arch Rivals, and it'll be part of a double A sided 7" single which is a split with Outlaws and will be out on Randale Records on February 13th. I asked Mike about what was in store for the band during 2017 and he said that as well as the single, they were also playing the following festivals; Punk And Disorderly, Oi This Is Tegelen and The Great Skinhead Reunion. If the amount of views for their blog update is anything to go by, all those appearances are sure to draw in packed crowds.

All I need to do now is thank Mike for the great list and leave you in his hands....

Cheesy video, but great song that crosses over the Oi! and hardcore boundaries. One of America's best. Roger's vocal style may be an acquired taste, but these guys are the real deal.

The masters showing the rest of us how it's done... Great band and great guys...

A band that are totally underrated, they wrote some brilliantly angry songs that represented the desperation of the times perfectly...

Even though they didn't write the lyrics, the Business took Gary Johnson's poem and made it their own. Anthemic and 100% spot on, it's as relevant now as it was in 1983, possibly more so what with the current flock of internet warriors...

The music industry is full of money men with no real passion, they tell people what to like and sell them lowest common denomination crap... Put them up against a wall and shoot them...

Another hardcore band, this time more of a thrash crossover... The current line up is playing in Leeds later in the year but I'd give anything to see them at their peak with the original line up. Angry, energetic and passionate, ear blistering...

I love early Resort stuff, but the "This Is My England" album is one of the best come back albums of all time... Great musicianship with lyrics that remain true to their roots, but connect perfectly with modern life... There's life in the old dog yet...

The intro track on their (in my opinion) best album, Lion's Law are one of the current crop's best bands. This song could've been written in the 80s... If you haven't seen these guys live, do yourself a favour...

"...and out come the wolves" is my favourite Rancid album, but this song off it's predecessor was my introduction to the band. A cool as fuck video, this is Rancid at their best...

I could rewrite this list a dozen times, but this song would be on all of them... Another timeless track that still represents the modern scene It's frustrating that there are still divisions amongst us, the unity that so many of us crave is a distant and naive fantasy... Fuck the extremes, we'll never surrender...