Bent Out Of Shape - Divide and Conquer 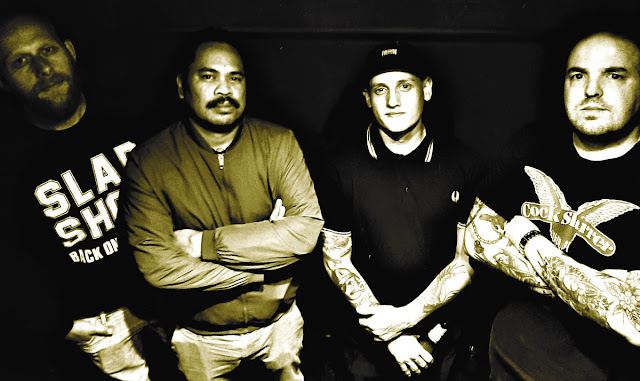 I've another debut release for you today, this time it's a track from a demo by oi/streetpunk 4 piece Bent Out Of Shape. They hail from Fryslân in The Netherlands and feature former members of Icepick, Spirit 84, DSS and No Denial to name but a few. The ep was scheduled for release this weekend at their planned show with Bishops Green and Arch Rivals but the Corona Virus put the kibosh on that so I'll give it a plug on here instead. You can get it on cd or digitally (name your price) here : https://bentoutofshape.bandcamp.com/ There's 7 tracks of hard as nails bovver boy music. The opener is an eponymous track about societies rules and the assholes that impose them. Other tracks deal with the betrayal of a friend, boozed up bust ups on a Saturday night, giving up your mates for the "love of your life", refusing to be pushed around and they round things off with a joyful track about the buzz that you get from going to your football team's packed stadium with a scarf around your neck.

It's an impressive debut by a band that arrive fully formed.

This song is about how the rich create targets for the poor to blame for their ills as a distraction to the big picture. It's called Divide And Conquer...

The poor stay poor and the rich stay rich,
It's been that way forever.
And when it comes to placing blame,
The rich are really clever.
They emphasize our differences,
Sow hate between you and me.
So instead of the fucking system,
You blame some poor refugee.

DIVIDE AND CONQUER, that's their fucking plan.
DON'T FIGHT EACH OTHER, Fight- the man.
There's more than enough, for us to go around.
But the higher ups, wanna keep us down.

They take the best years of your life,
And then your pension and your health.
And while you're barely getting by,
You create their wealth.
They control the media,
And play a nasty game.
So we fight amongst ourselves,
Even though we are the same.

Email ThisBlogThis!Share to TwitterShare to FacebookShare to Pinterest
Labels: 2020, Bent Out Of Shape, oi, streetpunk