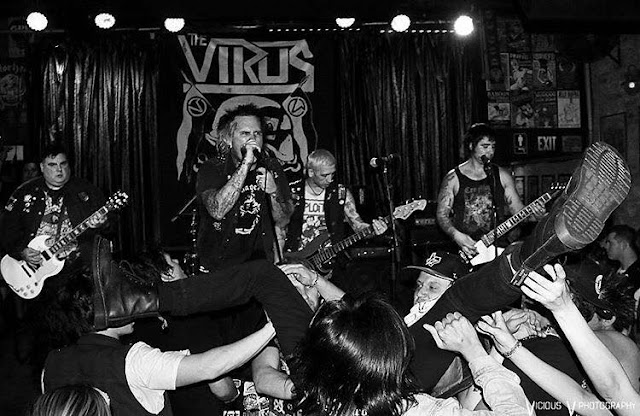 The Virus (https://www.facebook.com/viruspunks/) are Paul Sorrels (vocals), Dave Preno (guitar), Josh Howard (bass), Zach Kolodziejski (guitar) and Tyler Capone (drums) and they're from Philadelphia. They formed in 1998, split in 2004 and got back together in 2013. There's been numerous line up changes down the years but things have been stable as of late with no changes since I featured a song from their last album, 2017's System Failure.

They'll soon be releasing a new split 4 track 12" with New York hardcore outfit Thulsa Doom and they've released a single from it which you can grab "name your price" here :   https://thevirus.bandcamp.com/

The human race is hurtling rapidly to it's demise unless we can sort out our act and start behaving in a way that protects our planet and ourselves (and I think we know there's fat chance of that happening anytime soon!). Rising sea levels due to climate change are going to effect everyone's lives over the next few decades though a more immediate change to lives is already upon us due to the current situation with Corvid 19. It's the end of an era and it's covered at breakneck speed by a band that sound better than ever. This is Total Destruction...

Email ThisBlogThis!Share to TwitterShare to FacebookShare to Pinterest
Labels: 2020, punk, The Virus