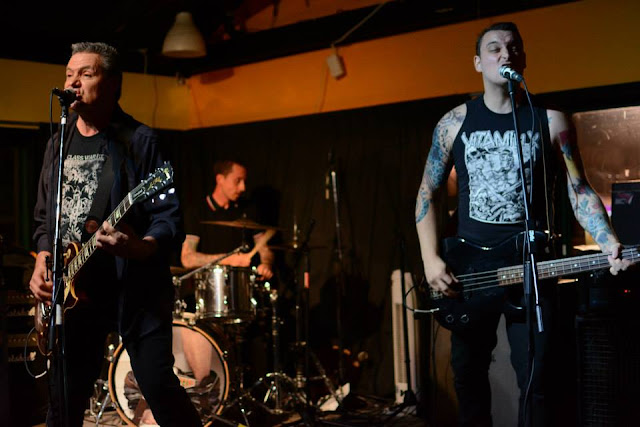 Another guest review today, this one by Ashley Colman. He''s a massive fan of  Canadian political 3 piece The Fallout (https://www.facebook.com/TheFalloutToronto/) so as they've just released an excellent new album I thought I'd ask him to say a few words. The album's called The Times Have Never Changed and it's out now as a joint release from Discos Machete (a new label started up by Victor of Brigada Flores Magon fame) and the ever reliable Rebel Time Records...   https://rebeltimerecords.bandcamp.com/album/the-fallout-the-times-have-never-changed-2

The Fallout are angry, passionate and committed to the numerous causes they support, like many a punk band. However, what sets them apart from the pack? TUNES my friends that's what. These political savvy punks have been railing against the tide since 2004 with a handful of releases which thankfully have been made available on their Bandcamp page, remastered, remixed and not to be missed. Also, pay what you want, or free? Nah, scrap free, because we know what work goes into getting underground music out there don't we?


Anyways, what do you get from The Fallout, 15 tracks of pacey, tuneful, fist pumping anthems, with their interpretations of this fucked up world chronicled into the biting lyrics, with Lord Byron's distinctive vocals to the fore. Patty 'O' Lantern (bass) he of Brutal Youth and Class War Kids infamy handles the vocals on 'Can't Take It',  'Invincible', 'Red Light Union', & 'Turn It Down', with him adding a new dimension as well  with his backing vocals throughout this great album. The Class War Kids classic  One Last Struggle is covered within the album.


Comparisons... don't we love 'em. Think of early SLF, Newtown Neurotics and fellow Canadians The Subhumans and your getting there and like the afore-mentioned, TUNES my friends in abundance. File under absolutely essential.

This is the title track, The Times Have Never Changed...