So you should all know James Domestic. He's featured on here previously with more groups than I can remember and his solo album from earlier this year, Carrion Repeating, is already turning up in some of the higher profile best of 2022 lists (https://louderthanwar.com/albums-of-the-year-2022/).
His latest outing is called Domestic Curse and it sees him teaming up with John Hewson (aka Curse) to produce a mini album titled The Five Curses. It's a release that edges more towards the sound of James' solo album than his more usual shouty, full throttle hardcore barrage. It's described as... "Musically, we’re in electronic overload…think throbbing, whirring, and rattling synths, thumping kick drums, skeletal drum ‘n’ bass, chest-thumpin’ bottom end, and raw punk vocals in a long-form almost-stream-of-consciousness style; sneering and barbed." Musically it's an experimentally pleasing mix of sounds whilst James drawls and sneers his lyrics with a mix of wit and despair." 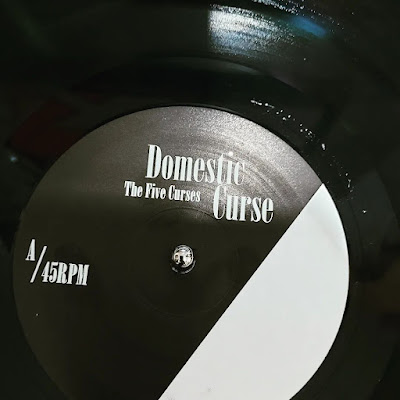 It's available from James' label Kibou Records
https://kibourecords.limitedrun.com/products/734147-domestic-curse-the-five-curses-12-mlp  https://kibourecords.bigcartel.com/product/domestic-curse-the-five-curses-12-mini-lp
and from Autonomonster Records (UK), Charlie's Big Raygun Records (UK), Cimex Records (Sweden), and Guerilla Vinyl (France).
This is the new video from it (and my favourite track), it's a wry takedown of far too many members of society. It points out the stupidity of their view point. It's called Antifascist Default...
Posted by mickfletcher at 00:42