The Darts (US) - Breakup Makeup 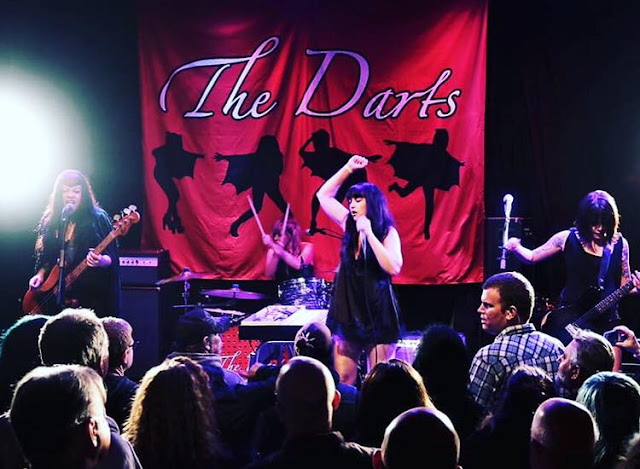 The Darts, or The Darts (US) as they now seem to be called, are the garage-psych-rock 4 piece that last appeared on here last Christmas with this festive offering   https://justsomepunksongs.blogspot.com/2018/12/the-darts-mistletoe.html

Since then the girls, Nicole Laurenne (organ/vocals), Christina Nunez (bass/vocals), Rikki Styxx (drums/vocals) and Meliza Jackson (guitars/vocals), have released their second proper lp. A follow up to 2017's highly rated Me.Ow. it's titled I Like You But Not Like That and it's available from Alternative Tentacles on dark red vinyl and cd https://alternativetentacles.com/product/i-like-you-but-not-like-that/ as well as to download https://thedartsus.bandcamp.com/album/i-like-you-but-not-like-that-2

Reviews of the album throw around words such as sultry and seductive and comment of fuzzy guitars, bass heavy riffs and moody synth. The band describe themselves as being akin to Elvira and Wednesday Adams consuming the flesh of man, drinking shots of snake venom and starting a band for the bride of Frankenstein's bachelorette bash. Think 60's garage, think Nuggets compilations but with a modern production. You can get more info on them here :   https://www.facebook.com/thedartsUS/

This is the opening track on the album and the new video. The tale of a volatile relationship, slammed doors followed by new beginnings all told over a swirling, hypnotic backbeat. It's called Breakup Makeup...

Email ThisBlogThis!Share to TwitterShare to FacebookShare to Pinterest
Labels: 2019, garage, psych, The Darts