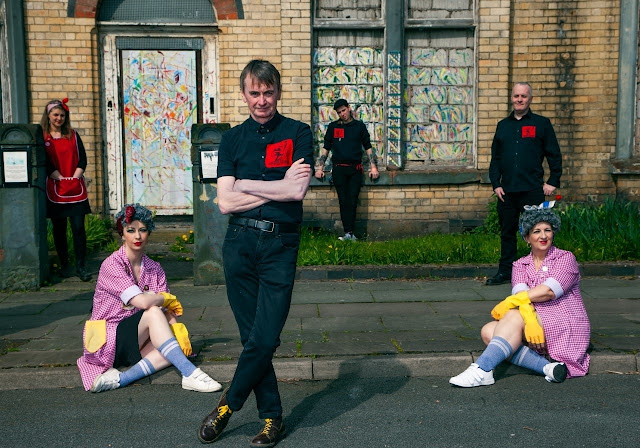 It's not that long ago since Pete Bentham & The Dinner Ladies featured on here with a song from their 10th anniversary retrospective This Is Kitchencore which was followed a day later by a run down of frontman Pete Bentham's 10 favourite punk songs (https://justsomepunksongs.blogspot.com/2018/12/top-10-songs-chosen-by-pete-bentham.html).

The Liverpool band return today with a song from their excellent upcoming new album England's Up For Sale. You may recognise the song as it featured on This Is Kitchencore but if you tune into Sunday's Just Some Punk Songs show I'll be playing a new track from the album.

So, England's Up For Sale.... The band's 4th studio album and their most complete lyrical work yet. It's a snapshot of the current state of a bewildered Brexit Britain full of bent politicians, gentrification, homogenisation, boy racers and unruly youth. Is it a punk album? Well it certainly has elements of punk but it also borrows from garage, post-punk, rock n roll, folk and even jazz. As it says in one of the songs, genres are for the gormless so I'll be tagging this album eclectic cabaret and hoping I get their nod of approval.

Alongside Pete Bentham (guitar/vocals), the album features Pete Andtwoveg (bass/vocals), Sonny Rollingpin (sax/vocals), Tony Calzone (drums) and of course the Dinnerettes, Patty Cakes & Peggy Bread. The band's probably best known for their highly entertaining live shows and they've a number lined up, including a couple in Germany. You can check details here :   https://www.facebook.com/dinnerladiesliverpool/

The album is out on 4th October on Antipop Records and you can preorder it here :   https://antipoprecords.greedbag.com/buy/englands-up-for-sale-0/

This is Goth Postman...