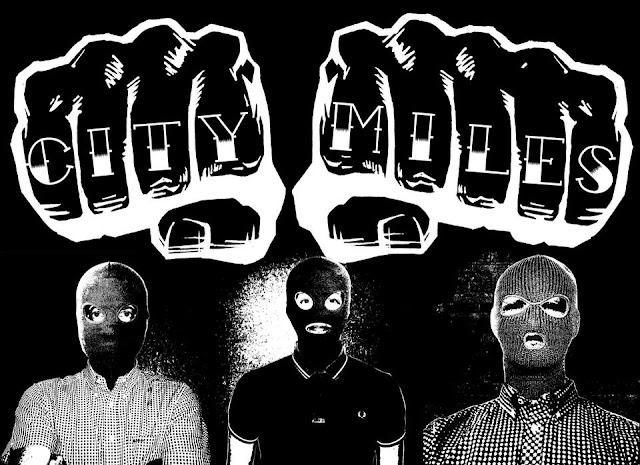 City Miles are the exciting new UK Oi/streetpunk band that have only released one song so far, but what a great song it is. Titled Skinhead Till The End, it's one of the years best tracks and bodes well for future releases (they tell me more songs are currently being written and recorded). You can check it out here :  https://citymilesoi.bandcamp.com/releases


As for the band themselves, no one seems to know anything about them. For a new band they've hit the ground running, it's hard to believe that they've not previously been active on the punk scene (and if you check out the comment on The Streets song below we now know at least one of them has previously been in a touring band 15 years ago). All we know at the moment is that there's 3 of them, they wear balaclavas and they're bloody good. One other thing I've managed to discover is their 10 favourite songs. This is a joint effort with all 3 members contributing so thanks guys, over to you.....


This list could be a hundred songs long and change every single day but today and off the top of our heads here's the list of ten songs you wouldn't go wrong having on a playlist. If you haven't heard any of them give them a go.


It's a classic right? Still gets put on and loved to this day.

2)  THE SPECIALS - Doesn't Make It Alright


Love the Specials and the lyrics to this are spot on, Stiff little fingers did a great cover version too.


I can remember clearly the first time I heard this and fell in love with it, I never thought one band could use so much distortion and still be that tuneful.


Love everything about the ruts this one gets us dancing.


One of the best opening tracks to a punk album ever.
Gravelly voice, great lyrics, dual guitars what else could you want, RIP Dickie.


An all time favourite band, still going strong, hit after hit of the first few albums, hard to choose one song by them.

7)  CONFLICT - From Protest To Resistance


Talking so much sense. Up the Punx, RIP Paco.


Bit of a curve ball, first heard this Streets album when on a tour when it came out and the tour manager played it in the van over and over and to this day, the album still makes me laugh.


Breath of fresh air at the time and timeless time bomb.