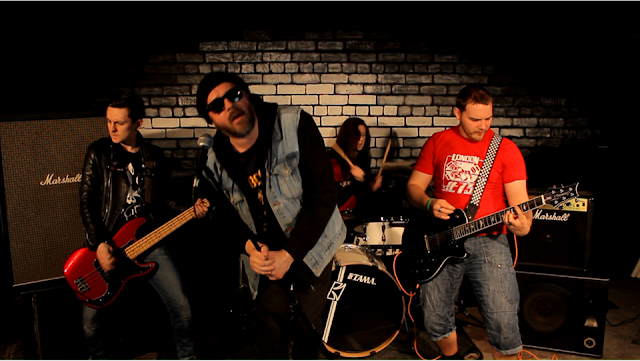 One of my favourite releases of 2017 so far is the split mini album Tales From A Punk Rock Road Trip which features songs from both B-Leaguers and Hooligan Crooners. It was released a couple of months back and one of the Hooligan Crooners songs featured here : http://justsomepunksongs.blogspot.co.uk/2017/03/hooligan-crooners-it-goes-like-this.html. I also managed to interview both bands  http://justsomepunksongs.blogspot.co.uk/2017/02/interview-with-b-leaguers-and-hooligan.html

Today I'm posting a new video from B-Leaguers which is for one of the album's highlights. The band are from Lincoln and have previously featured on here with a song from their Death Of A Western Heart album but on this release I think they take things up a notch. To label them just a punk band would be to do them an injustice as whilst they sit comfortably in that genre, they aren't constricted by it. They'll also appeal to those who wouldn't necessarily class themselves as punk fans. Their sound is big, it's catchy and it often has a wistfulness that'll have you harking back to times long gone. If you haven't discovered them yet then head over here.....  https://bleaguers.bandcamp.com/

Top song, top video, this is World Famous (In A Little Town)....