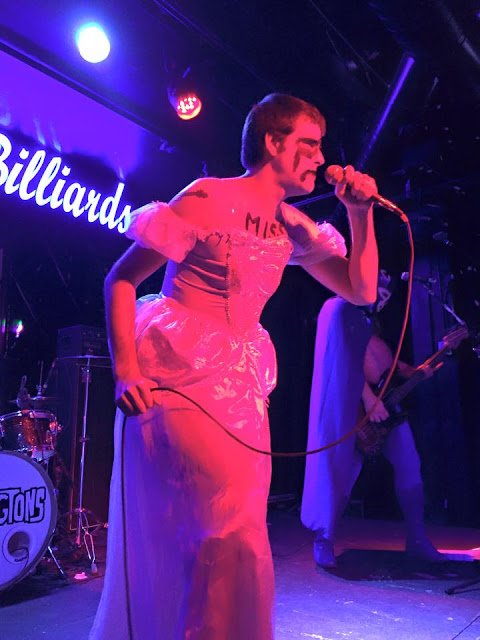 Grim Deeds are from Foster City, California  They play dumb punk songs with the emphasis on humour and vocalist/guitarist/bassist Deeds has chosen 10 songs for the blog. You can check out Grim Deeds' Bandcamp here : https://grimdeeds.bandcamp.com/music

HAILS! The following tunes are Deeds-certified as “R4RE” and worth your consideration. Some may challenge your definition of punk, but all are catchy and well-written according to me. Dare to care!

Weird Paul has been cranking out low-fi hits for the past 30 years and my recent discovery of his work has been nothing short of a giddy rush. Peanut Butter Recall perfectly encompasses his songwriting talent and penchant for making the ordinary seem extraordinary. Note his facial expressions throughout.

9. Mark Gormley – Without You

Following a priceless introduction by the one and only Phil Thomas Katt of “The Uncharted Zone”, Mark Gormley’s single immediately grabs you with its understated yet powerful riffs and hooks. The low-fi production adds a cheesy element that somehow improves the overall vibe of the song. I imagine this tune could’ve easily been beefed up for inclusion on an 80’s action movie soundtrack, but instead it’s accompanied by a hilariously low-budget music video with a wistful and romantic theme. The featured model has that “4th hottest girl in Pensacola” look, and the viewer is left to ponder her connection to the artist and Mr. Katt himself. Enter the Uncharted Zone!

8. Shadow Warriors – Fight For Be Free

Here’s a great example of something that can be crappy and epic at the same time, resulting in a net gain of listening pleasure. Shadow Warriors is Sam Totman from Dragonforce’s ninja-themed side project that mixes power metal with punk in the most demo-tastic way. Former (and best) Dragonforce vocalist ZP Theart provides the vocals on this track, and it’s fun to hear his unpolished vocal style. Some of the Shadow Warriors tunes later ended up being used for Dragonforce I think, but I prefer the drum machine and bedroom production values.

Ron Wasserman’s crowning achievement was creating the theme for the Mighty Morphin Power Rangers series, but he recorded a ton of other excellent and underrated tunes for the franchise while employed by Saban Entertainment. This tune always stood out to me, both for its catchiness and its budget-level production. Ron would later go on to re-record a lot of the Power Rangers tunes, but I prefer this era.

New Zealand’s pop punk duo The Rocket Jocks have crafted some of the catchiest and most underrated tunes in the Ramonescore genre. This is a great example of their songwriting genius – simple, concise, fun, and extremely catchy.  These guys perform live with a drum machine, which earns them additional kudos from yours truly. Grab anything you can from these guys, they’re all great.

This pop punk gem is my favorite track from their excellent yet unreleased album “Out Go the Lights”. A timeless rock vibe paired with tastefully understated arrangements – what a treat! Drummer Scott Matthews later formed the excellent band The Piniellas, and all of their tunes are highly recommended as well. But you should be more concerned with messaging Scott on Facebook to bug him about a physical release of this underrated and classic album.

Germany’s best pop punk band is also one of its most rare gems. The 1991 Spring Surprise album is excellent from start to finish, but this track always stood out as a real ripper. An ode to dirtbiking, it captures a Descendents-eque ethos while delivering a pummeling and concise slab of high-octane punk rock. The Richies have recently been playing shows and Axel has mentioned a new album, so let’s hope he can finish recording before he becomes too distracted by the new Babymetal album.

Unko Atama was my favorite San Francisco pop punk band, and their album Another Creature is an unsung classic. This song sounds like it was written by Yuji, and while George was my preferred songwriter in the band this one really stood out to me. The harmonies are haunting and the simplicity gives the song a classic and timeless feel. I also love when songs start out with just a single chord intro before the first verse. It’s also a good example of a pop punk song that has a darker melodic tone without indulging in cliché or stupid themes.

Written at a time when they had “nothing to lose”, the Sack album remains Kody Templeman’s greatest songwriting achievement in my opinion. The songs are a blast from start to finish, mixing street rock with wild party vibes and an over-arching theme of not giving a fuck. This cut is my favorite – the Sonny Carson sample at the beginning and the “DANCE SUCKA!” before the lead makes this tune a favorite among favorites. HAILS!

1. After School Special – The Generation Game

David Jones was a dear friend and favorite songwriter, and I miss him every day. After School Special was indeed a special band. The songs are honest and unabashed, and the recordings have a comforting simplicity and rawness that perfectly capture what I consider to be the best qualities of 90’s pop punk. This cut demonstrates both the poppy and punk elements of David’s craft well before Enemy You’s debut. After School Special never played a show, which makes their existence and impact all the more intriguing to me. Jones never wrote a bad tune, so check out all of his work. RIP.