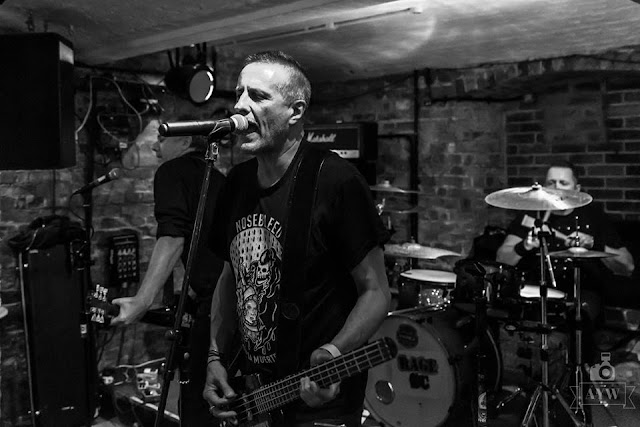 It's always great when you hitch your wagon to a new band that you think has potential and then go on to feature them over the years as every release improves upon the last. When I featured Reading dystopian post punkers Who Killed Nancy Johnson? (https://www.facebook.com/WhoKilledNancyJohnson/) last year I said that the chatroom folk on the latest Just Some Punk Songs show were commenting that Pretending To Like People was their best song yet. I'm expecting similar comments when I play a brand new track from their upcoming album later today (feel free to come join us and listen to an hour of great new punk music (https://www.facebook.com/events/679743719494244/).

The album is their debut, it's titled I See Six and it'll be released on June 26th. There's 2 tracks already streaming and they sound much better than a diy recording in a village hall in Oxfordshire has any right to. It's going to be a vicious political assault on a myriad of worthy targets backed by a frantically pounding back beat. The opening track is spot on. Our leaders aren't "lizards, not alien super creeps, not that bug-eyed conspiracy theory crap..." They're snake oil salesmen, they'll convince you that you can trust them, they'll promise you the world as they pick your pocket. A revolving fresh face with a handful of shiny baubles but in reality a cancer on society.

Track 2, the one you'll find below, deals with City folk. Not me and you and the majority of city folk who work hard to eek out a living but the ones who've been around since the onset of society, grasping, greedy and always hungry for greater wealth. Other song titles will include Communist, Rothmans and Notre Dame and I'm really looking forward to hearing them.

You can pre order the album (cd and digital versions) here :   https://wknancyj.bandcamp.com/album/i-see-six