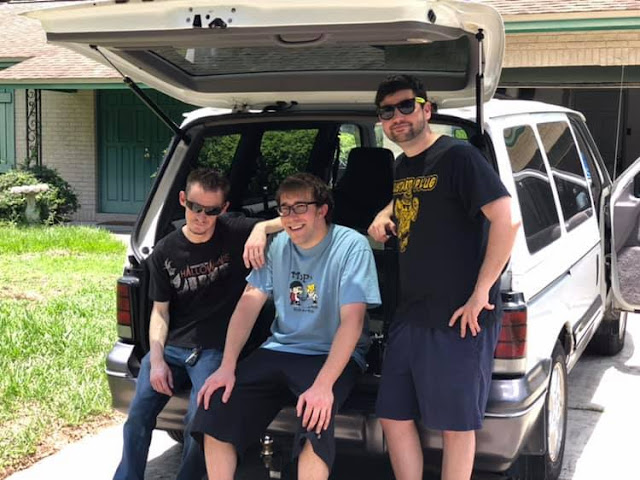 You know what. I'm getting fed up of cycling to work in the rain. It seems as though pretty much every day recently I'm getting soaked. Yeah I could buy some waterproofs (and probably will come payday) but in my dreams I'd move somewhere hot and sunny, somewhere like Tampa, Florida. And if I ever win the lottery and move to Tampa I'd make sure I went to watch a gig or two by Atomic Treehouse as they both look and sound fun. (This opening paragraph would probably be a touch more accurate if the weather in the video at the bottom of the page was a bit better, it looks as though even Florida gets the occasional cloudy day but sod it, humour me, I'm just trying to paint a picture of a band that'd sound great as you're driving down a coastal road in a convertible, top down, music blasting out).

So you now know their name and where they're from, I can also tell you they're a 3 piece pop punk band who formed in 2016 and line up with Alex Retro (Vocals, Guitars and Keys) Johnny Misophone (Bass and Backing Vocals) and Eric Stix (Drums and Backing Vocals). As well as pop punk they're also influenced by many of the catchy pop n roll songs from the 50's and 60's that inspired bands like The Ramones and The Queers. For more info go here : https://www.facebook.com/atomictreehouse/

And on to the important bit, the music...

They've just released their first full length album, it's Self Titled, it features 13 "geeky pop punk jams" and if you're a fan of this kind of music you'll lap it up. It's the usual bunch of songs about girls and relationships and video games and stuff... it's done really well (I'm getting reminded of The Young Rochelles) and it's definitely better than getting piss wet through cycling to work so head over to Bandcamp and have a listen :   https://atomictreehouse.bandcamp.com/album/atomic-treehouse-3

This was one of the singles that preceded the album and as there's a cool video accompanying it then that's the song you're getting today. It's about a guy who's not having the best of luck trying to win the affection of a girl and it's called Expired Box Of Chocolates...