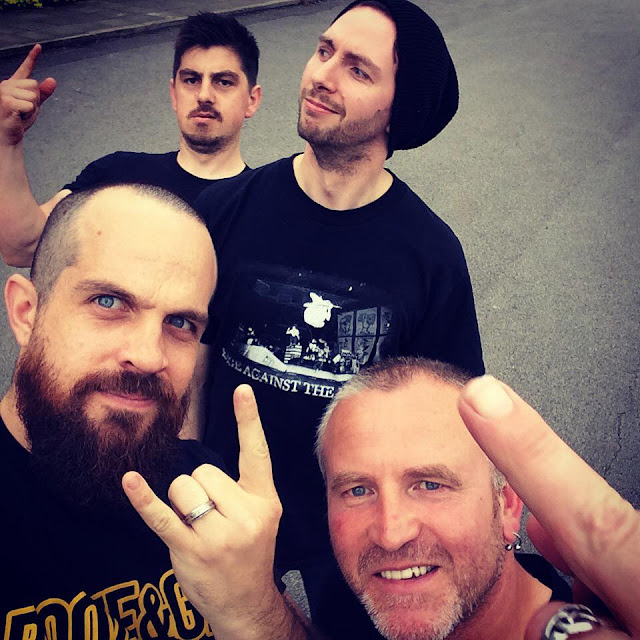 So. Up at 4.30am. The result from last night's Croatia vs England World Cup Semi Final still getting me down. Get in the car for the 35 mile drive to work and the guy on the radio is sounding pretty flat as he discusses the game on Talk Sport. Sorry fella, I can't be arsed with you this morning. So I take the cellophane wrap off a cd that came in the post yesterday, slip the disc into the player and even though the songs blasting out of my car speakers deal with topics such as self loathing, suicide, racial intolerance, the bombing of innocent women and children, nut jobs being allowed easy access to guns, the taxman etc.... it still brightened up my day considerably.

Kill The Colossi are the Bournemouth band who formed in 2015, feature ex Gonads drummer Steve Higgins and who's last single, Fuck The Taxman, featured in the Just Some Punk Songs best songs of 2016 chart. Their sound is a mix of melodic punk and street punk (with the occasional ska interlude), their lyrics are intelligent whilst frontman Tyrone Moll has a voice that compliments it all perfectly. Rounding out the line up are guitarist/vocalist Adam Storey and bassist Rowan Miles. They list amongst their influences the likes of The Clash, Specials, King Blues, Booze & Glory, Rancid etc and I think that'll give you a fair idea of what to expect from them.

The new album is titled Herd Mentality and it's available from NBQ Records :  https://killthecolossi.bigcartel.com/product/herd-mentality-album

I don't usually comment on the production on here but I'll make an exception as the album sounds great (take a bow Gareth Matthews at GM Mix). The songs are both thought provoking and catchy as hell. I've enthusiastically said there's a few albums in the running for 2018's best lp (Material Support - Terror Prone Nation is probably just ahead of the pack) but I'm sure a few more listens will see Herd Mentality challenging for that accolade. 10 tracks, not a bad one amongst them, definitely demanding of your attention.

They've just released a very timely video. To coincide with Donalt Trump's visit to the UK, here's a song that wonders what's wrong with the world today and asks will this fear culture go away or will suspicion and intolerance continue to prevail.

Build your wall, we'll tear it down. Why don't we learn from history? This is called 196 Walls....